PHOTO: I’m showing off my butt because it’s a trend -Toke Makinwa 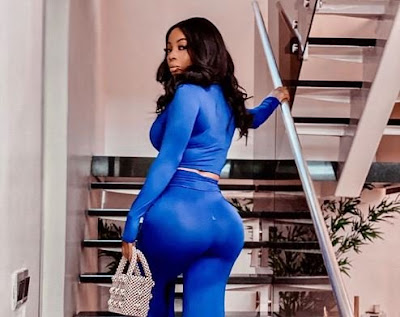 Toke Makinwa, media personality, says she is showing off her butt because she thinks such has become a trend.

The 35-year-old presenter-cum-actress disclosed this on her social media page, where she accompanied the post with a picture in which she was clad in a steamy blue dress and appeared to be heading for work.

Makinwa noted her butt has “constantly turned to negative energy,” of recent, hence she has decided to flaunt it.

“My back is constantly turned to negative energy scratch motivational caption. Yes, I’m showing off my a** because I think it’s a trend and inserts Lauryn hill Doo Wop. Good morning, damn I’m all that,” she wrote on Instagram.


My back is constantly turned to Negative energy ✌️scratch motivational caption, Yes I’m showing off my ass cos I think it’s a trend 😆 inserts Lauryn hill Doo Wop 😄 Good morning ☀️ damnnnn I’m all that 🤪
A post shared by Toke Makinwa (@tokemakinwa) on Mar 10, 2020 at 12:32am PDT

The gifted OAP has made headlines for several of her opinions on ‘Toke Moment,’ a YouTube vlog series, where she reflects on various issues including marriage and lifestyle.

She had stirred controversies in one of such series when she accused African parents of “ruining lives” and being “the world’s worst.”

In another of her Vlog series, she had taken a swipe at African traditions as well as religion for discouraging divorce among couples, while advocating “till death do you part” gospels.

In February, she had told Uti Nwachukwu, an actor and presenter, during an episode of her talk show that the mothers of most guys she had dated don’t seem to like her.