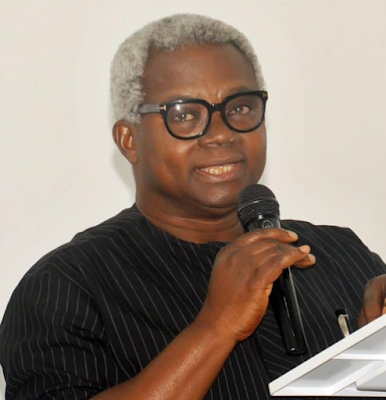 The Director-General of the Voice of Nigeria, Mr. Osita Okechukwu has faulted claims by a national leader of the All Progressives Congress, APC, Chief Bola Tinubu that 2023 virus was behind the crisis rocking the party.

Tinubu, who broke his silence on the matter weekend, said those with aspirations ahead of the 2023 elections were fueling the crisis. He went ahead to declare support for Oshiomhole.

But Okechukwu, one of those rooting for Oshiomhole’s outster, insists that the party chairman brought woes upon himself.

He told Tinubu that “as passionate and loyal members of the APC at the grassroots level, they hitherto held Oshiomhole in high esteem and had high expectations of optimum performance and quality leadership from him.”


The VON DG said that was why APC delegates nationwide unanimously and consensually elected him as sole chairmanship candidate two years ago.

He declared that “It is, therefore, with deep regret that two years down the line, Comrade Adams Oshiomhole, now a Bull in a China Shop, in utter disregard to the high expectations of the responsibility entrusted on him, and the constitution of the APC has today committed without remorse or introspection 10 monumental cardinal sins against our great party, APC.

“If there is a virus as our revered Asiwaju proclaimed? It is more of Osho-Virus than 2023 Virus.”

He itemized what he called “the 10 Osho-Virus blunders” as follows:

“Revival and Resurrection of collapsing Peoples Democratic Party (PDP) structure, a political party, which in 2018 was ravaged by intra-party feud, to win more states like Adamawa, Bauchi, Zamfara, and Sokoto, all strongholds of APC.

“Brazen Incompetence: Second revival of PDP is evidenced in the Bayelsa State imbroglio. It is our considered belief that no sane national chairman of a prominent political party would submit the name of an incumbent Senator of the Federal Republic of Nigeria to the Independent National Electoral Commission (INEC) to be Deputy Governor, without evaluating the strategic cost to the party. Most importantly lack of diligent scrutiny of essential documents of candidates, or One Man-Show, points to Osho-Virus crass negligence and incompetence.

“Employing Double Standards- It is on record that Comrade Oshiomhole in his infinite self-survival-instinct ratified the Lagos gubernatorial primary election and which was not conducted by the APC Gubernatorial Primary Panel set up by him, but by Asiwaju’s men and did not ratify that conducted by Senator Amosu’s men at Ogun State? Is this kind of atrocity 2023 Virus or Osho-Virus?

“Secondly, Comrade ordered State Chapters to choose between Direct and Indirect methods of primary election only to change the choice made by States depending on his whims and caprices. For instance, he changed that of Enugu State from indirect to direct in the midst of gubernatorial election.

“Thirdly, is 2023 or Osho-Virus responsible for favours Comrade dispenses at will, ‘That Elrufia was the one who came to me crying to help him get rid of Shehu Sani and to replace him with his boy, Uba Sani and I sacrificed my comradeship with Shehu to please him’ – Comrade Oshiomhole said himself.

“In his classical double standard paradigm he glossed over his suspension by his Ward, whereas he ratified that of Ward suspension of Barrister Inua Abdulkadir, vice chairman North West. Is that 2023 or Osho-Virus?

“Covert use of the 2018 primary elections to empower his Edo Peoples Movement (EPM) native political structure. Not only did EPM members populate all state panels more than any other state, but they also headed about 10, as well as the most revered Appeal Panel. This way he not only violated the Federal Character Principle, but also denied most states the golden opportunity of heading at least one panel. Is this gross nepotism 2023-Virus?

“Insincerity: Comrade Oshiomhole celebrated the abolition of Godfatherism in Edo State only to paradoxically deploy his handgun, the Edo Peoples Movement in a vain glorious plot to become Godfather. Is this 2023 or Osho-Virus?

“Erosion of Buhari’s 12 Million Vote-Bank – Comrade Oshiomhole often displayed wanton narcissism and rascality in his dealings with state governors, members of NWC and party stakeholders by dishing out impulsive orders he could not condone when in office as governor; if not stopped, he will erode APC the famous Buhari’s 12 Million Vote-Bank, especially when Mr President will not be on the ballot in 2023.

He pleaded with President Muhammadu Buhari “the foremost leader of our great party, His Excellencies, Governors, Distinguished Senators, Honourable Members of National and State Assemblies and distinguished members of the National Executive Committee (NEC) to Save the Soul of APC from further unknown consequences of Osho-Virus damage and destruction. He is a Bull in a China Shop.”