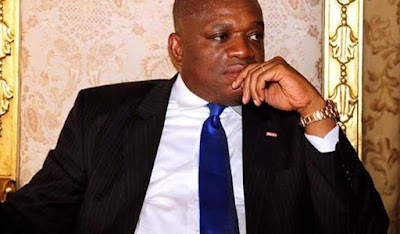 The Federal High Court in Lagos on Thursday granted post-conviction bail to a former Director of Finance and Account at the Abia State Government House, Jones Udeogu, who was sentenced to 10 years’ imprisonment last year December.

Udeogu was convicted of N7.1bn and jailed alongside his principal, Orji Uzor Kalu, a former governor of Abia State, who bagged 12 years in prison.

Following an application by his lawyer, Chief Solo Akuma (SAN), on Thursday, Justice Mohammed Liman granted N50m post-conviction bail to Udeogu pending the determination of his appeal against the December 5, 2019 judgment of Justice Mohammed Idris, who sent him to prison.

Akuma told the judge that his client was suffering from prostate cancer and tuberculosis.

The SAN told the judge that Udeogu was diagnosed with prostate cancer three years ago at the Abia State Teaching Hospital and that in the course of carrying out tests on him, the hospital also discovered that he had tuberculosis.

Akuma said Udeogu was still making arrangements to book a date for surgery when he was convicted and sent to prison last December.

In an affidavit filed in support of the post-conviction bail application, one Lazarus Agu said the correctional facility where Udeogu is serving his jail term “does not have the facility to provide the type of medical attention Udeogu requires to survive the ailments he is suffering from.”

He said, “The correctional facility authorities have failed to provide or arrange for the treatment of the 2nd defendant outside the facility.

“The type of ailment the 2nd defendant was diagnosed with is of communicable nature and exposes other inmates to great danger.”

In his ruling, Justice Liman said he was satisfied that Udeogu had disclosed reasonable cause of action to qualify for a post-conviction bail.

The judge said, “I am of the opinion that this application has disclosed a reasonable cause of action that the defendant’s health has greatly deteriorated and it cannot be salvaged by the doctor in the correctional service centre. Accordingly, this application is meritorious and succeeds.”

He granted the N50m bail with two sureties in like sum.

The judge had on December 23, 2019 rejected a similar application by Kalu seeking a post-conviction bail pending the outcome of his appeal against his conviction.

In his own application, Kalu had urged Justice Liman to release him on bail on the grounds that he was battling some health challenges which the medical facilities in the prison could not handle.