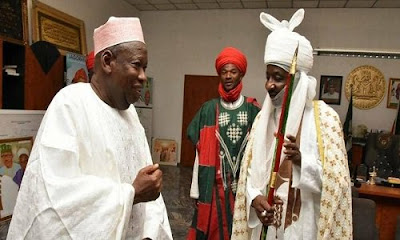 One of the reasons Muhammad Sanusi II was deposed as the Emir of Kano was his frequent public criticism of the government of Governor Abdullahi Ganduje, says Special Adviser to the governor, Salihu Yakasai.

Yakasai, who revealed this on Channels Television’s Sunrise Daily programme on Tuesday, said no one in power could condone such public criticisms.

He said Sanusi, who had easy access to Ganduje, should be having private discussions with the governor on state issues instead of criticising him publicly.

The governor’s spokesman said, “The emir had access to the governor and could have advised him if he wanted to but unfortunately, he only finds podiums and stages as the only means to advise the government which is not right.


“So, you can portray it has political or whatever but the fact remains that no one would allow such disrespect and open criticism when you have access to him.”

Yakasai said, for instance, the emir criticised the Kano Metro proposal publicly when he had access to the governor.

He said another reason Sanusi was deposed was that since the creation of new emirates over nine years ago, he had failed to attend government functions.

The governor’s spokesman said such an act of insubordination was long tolerated.

He said, “For the past 10 months, since the creation of the new emirates by Governor Ganduje, you can count the number of important events organised by the state government including international events which the emir was invited and he never attended.

“I can tell you that the emir did not even attend the free and compulsory basic education programme in the state launched by Vice-President Yemi Osinbajo. People are free to say whatever they want to say but this is the reason for the dethronement.”

When asked if these reasons were enough to depose a monarch, Yakasai said the reasons adduced were appropriate because they were in contravention of the Emirate Council Law.

Yakasai alleged that even the immediate past Governor of Kano State, Rabiu Kwankwaso, gave four queries to Sanusi, adding that Ganduje deserved commendation for being more lenient.