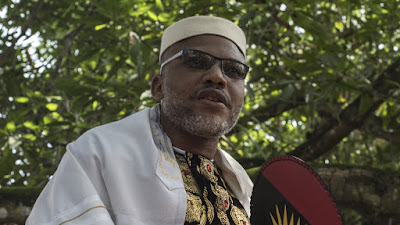 Nnamdi Kanu, the leader of the Indigenous People of Biafra, has mocked former Head of State, Gen. Yakubu Gowon, former President Olusegun Obasanjo and a ex-military commander, General Theophilus Danjuma, over their separate calls for restructuring of the country.

General Yakubu Gowon (retd), had at a public event organised by Igbo Leadership Development Foundation on Thursday, admitted that the Igbo nation had been marginalised in Nigeria’s polity.

He said, “I believe that a lot of injustice has been done to the Igbos and a constitutional debate on restructuring must address all imbalances and restore hope and confidence.

Also, Obasanjo had condemned the current state of affairs in the country in his speech on Saturday at the Frederick Fasehun 1st Memorial Lecture.


The ex-Military leader said, “We estimated that Federal Government would suppress the Biafran rebellion within three months. To make allowances for the unforeseen, we allowed six months. But it took us thirty months, five times what we allowed for, and what is more, we nearly lost the war. And as a Field Commander at the end of the war, I can attest that we fought with all Nigerian tribes including Igbos against Biafra.

“And if after over ten years of fighting Boko Haram, the terrorist group is still waxing strong, let nobody out of self-delusion think that a war of self-determination by one or more geopolitical zones of Nigeria with the present disenchantment would be easily suppressed by the rest of what may remain of the country. Some will fight to the last drop of the blood of their group rather than suffer the indignity of slavery, oppression, domination and atrocious injustice in the land of their birth and the only one that they can call their country.

“If Boko Haram can get an outside support, any geo-political zone opting for self-determination may equally get an external support. War may not necessarily go as planned, estimated and predicted. Everything must, therefore, be put in place to avoid a war, the end of which no one can precisely predict. There is no assurance that Nigeria can survive a second civil war. But rather, we should seek political solution and avoid a destructive civil war.”

Nnamdi Kanu, however, believes that these were men who rather took up arms against the Igbo than restructure the country in 1967.

“In 1967, Gowon, North & South West rejected restructuring (known then as ABURI) and banded together in a genocidal war against Biafrans that stood for ‘restructuring’,” Kanu wrote on Twitter.