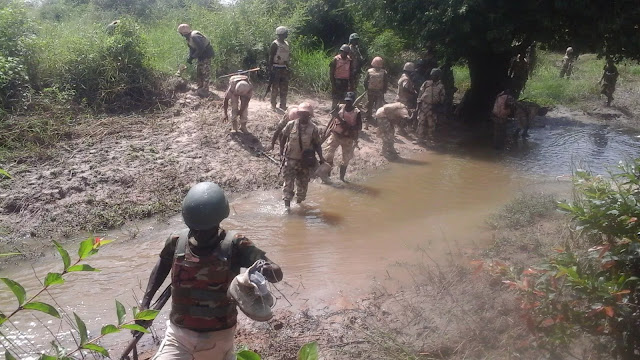 The troops of the Nigerian military have shot dead 54 Boko Haram terrorists during separate encounters in the Gwoza area of Borno State and Madagali area of Adamawa State as well as in a border area with Niger Republic.


Two were killed in Madagali while 48 were shot dead during an operation with the Sector Four of the Multi-National Joint Task Force at Tumour area of Niger Republic.

The coordinator of the Defence Media Operations, Maj Gen John Enenche, stated this on Monday at the DHQ, Abuja, while briefing newsmen on the operational activities of the armed forces in the last one week.

He said, “Troops had some encounters with the Boko Haram insurgents. The troops repelled the terrorists’ attack at Yamteke in Gwoza LGA. Four Boko Haram terrorists were neutralised while three AK-47 rifles, two hand grenades and one Tecno phone were recovered. Furthermore, at Sabon-Gari village of Madagali LGA, two terrorists were killed and one AK-47 rifle was recovered. At Tumour in Niger Republic, 48 terrorists were invalidated while four others were captured by the troops.

“Meanwhile, troops of Operation Safe Haven encountered some gunmen at Kurgwi along Namu-Chibdai road in the Quan Pan LGA of Plateau State on March 19. In the process, two notorious gun runners were killed and one AK-47 rifle was recovered.

“Same day, four suspected Sara Suka activists were arrested during a cordon-and-search operation. Seven cutlasses, three knives and substances suspected to be illicit drugs and charms were recovered from them. The public is hereby commended to provide credible information to the troops.”