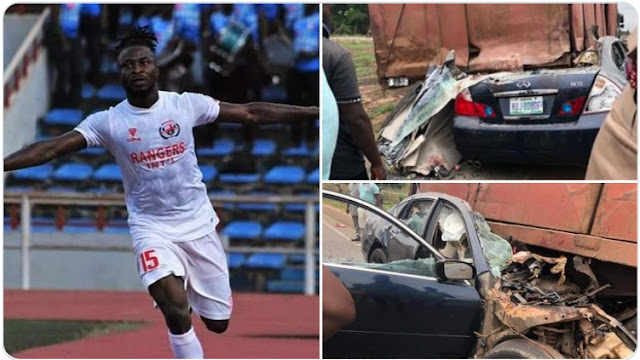 The club confirmed this on its Twitter page but didn’t give details.

“We lost Ifeanyi George this morning,” the club tweeted.


It was learnt that the 26-year-old striker’s car rammed into a truck on his way to Lagos.

“He was on his way home to spend the break we declared in Lagos. We will issue an official statement soon,” an official of Rangers stated.

The Flying Antelope management had approved a ten-day break following the suspension of the Nigeria Professional Football League due to the Coronavirus pandemic.

It was also gathered two other persons were in the car alongside the Rangers Assistant Captain when the accident happened.

However, we could not ascertain the condition of the remaining two, identified as George’s friend and a B team player, as of the time of filing this report.

Reacting, the management of Osun United sought divine intervention in the recurrent death of Nigerian footballers.

A statement by Osun United’s Vice President, Mr. Layi Adesiyan, said, “What has befallen football fraternity in Nigeria in a couple of weeks is saddening, unfortunate and requires fervent prayers.

“It’s shocking to wake up and hear the death of another budding talent, few weeks after we lost Martins Chimeme of Nasarawa United and Tiamiyu Kazeem of Remo Stars to the cold hands of death.”