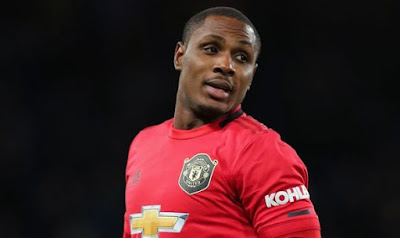 Odion Ighalo is confident Manchester United can beat any team if they are at their best.

Ighalo signed for his boyhood club (Manchester United) on loan until the end of the season from Chinese side Shanghai Shenhua in January.


Since then, he has scored three goals in eight appearances for Ole Gunnar Solskjaer’s side, and enjoyed his first Manchester derby victory on Sunday.

“We have what it takes to do even better,” Ighalo told the BBC.

“We are capable of beating any team if we play to our standard and play very well.

This form can be sustainable because it’s hard work, belief and determination. The group is together working towards one goal.

“I’m not saying we’re not going to lose games – sometimes we will. But we are sticking together, fighting together, and our belief is there. I think we have what it takes to do even better than we are doing now.

He also revealed the panic to make his move from China possible with the coronavirus scare.

“When my agent told me about it, I was hoping and longing, but I was having doubts in my mind because I was in China. How was I going to fly to the UK? Am I going to beat this coronavirus to get in and United have another striker they are looking at?

“I was happy my name was being mentioned but I did not put my mind on it 100% because I thought it was not going to happen because of the situation in China.

He also reserved special praise for Bruno Fernandes who has also impressed at the club since his arrival at Old Trafford.

“What Fernandes brings is unbelievable. It’s not my first time playing with Bruno. I played with him at Udinese back in 2010.

“He’s a great player. He has vision. He’s the guy who wants the ball because he can do something fantastic with it if you give him space. He’s a good passer of the ball and he’s what this team needs to score goals.

“You’re still going to see more and better from him because he is still getting used to the Premier League. When he’s finally settled Bruno Fernandes is going to do well in this team.

“Before I came here I knew Manchester United were looking at him and I was hoping they would get him because he is a good player and I knew he was going to change the dynamic of the team.

“He’s not going to have the best game every time but what he is going to bring to the team is going to be unbelievable.”