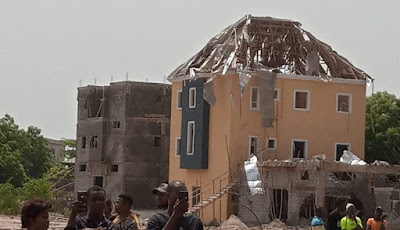 Some Abule Ado residents in Lagos State, who were affected by Sunday gas fire outbreak, have started packing their belongings to different destinations.

Some of the victims told News Agency of Nigeria that the move was to avoid further destructions as the fire fighters were still battling to put off the blaze.

Mrs Bisi Lateef, one of the victims, who was with her children said many of her household properties were destroyed by the fire.

She narrated how her house was engulfed by fire when she and her children went out to visit a family friend.


Lateef applauded her neighbours for calling her on phone to alert her of the incident, saying “little of my property was saved by people around when the incident began’’.

“I don’t know where to go with these things in my car boot; those are the remains of my households. All that I laboured for are gone.

“My husband’s car that was parked in front of the house was already burnt before my arrival and I don’t even know what to tell him when he comes back from tour.”

Lateef said that she would drive her children to a safer place in a public school at the Ojo Barracks area for safety until she found a better place to stay.

Mr Basil Akobundu, one of the affected residents, while moving his household items said that he just wanted to leave the place for safety.

“Although, I don’t have a particular place where I want to relocate to but the situation here is devastating.

“As you can see, the fire has destroyed many buildings close to my own and its raging towards my house, but I will not wait for it to happen.

“If it means staying on the road away from the scene with my family alive is better than being counted a casualty.

“The way I see this fire burning, it will not be up to an hour before it gets to my house.”

Meanwhile, the Amuwo Odofin Local Government (LGA) Chairman, Mr Valentine Buriamoh in charge of the area had visited the place to ascertain the level of damage.

He also promised to assist the victims.

Reuters reported on Sunday that an explosion at a gas processing plant on Sunday killed at least 15 people and destroyed about 50 buildings due to the fire.

The Nigerian National Petroleum Corporation (NNPC) said the explosion was triggered after a truck hit some gas cylinders stacked in a gas processing plant near the corporation’s pipeline in Abule Ado area of Lagos State.

The impact of the explosion led to the collapse of nearby houses, damaged NNPC’s pipeline and caused the corporation to halt pumping operations on the Atlas Cove-Mosimi pipeline, the state-owned oil company, it said in a statement.