2:44 AM CuteNaija 0 Latest News in Nigeria 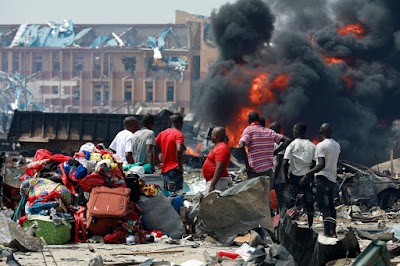 One more body was recovered on Thursday from the ruins of Sunday’s explosions at Abule Ado, a Lagos suburb, bringing total fatalities to 21.

The state Emergency Management Agency (LASEMA) said no fewer than 468 persons have been displaced.


Its Director-General Dr Femi Oke-Osanyintolu said 100 of the displaced persons have been resettled at the Igando Relief Camp.

Oke-Osanyintolu said two persons were reported missing, adding that the agency would continue to provide necessary updates with regards to the incident.

“Our help desk remains manned and our personnel are available to manage enquiries and arrange transfer to the LASEMA relief camp for those who have need of shelter and food.

“We appeal for calm and urge members of the public to keep away from the scene. We will continue to provide updates,” he said.

The Nigerian National Petroleum Corporation (NNPC) has begun to repair part of its System 2B Pipeline that was ruptured by the explosions.

The pipeline takes refined products from Atlas Cove Jetty in Lagos to Ejigbo, Mosimi, Ore and Ilorin, among others.

Some NNPC trucks were seen drawing fuel from the ruptured pipeline.

However, the NNPC said its trucks were sucking water and not fuel.

The Group General Manager, Group Public Affairs Division, NNPC, Dr Kennie Obateru, told The Nation that the Corporation was taking steps to fix the pipeline and remediate the environment.

Also Thursday, the Lagos chapter of the Christian Association of Nigeria (CAN) called for support for the N2billion Disaster Relief Fund initiated by Governor Babajide Sanwo-Olu for the victims.

It said the fund would go a long way in ameliorating the victims’ suffering.

Chairman Lagos CAN, Apostle Alexander Bamgbola, in a chat with reporters, asked churches and good-spirited Christians to contribute generously to the relief fund.

He said: “We strongly appeal to all the ministries and churches in Lagos state to contribute generously to this fund. No contribution will be too small.

“We encourage you to please send your cash contributions directly to the accounts of the fund as indicated by our dear Governor.

“We have absolute confidence in our dearly beloved Governor that the funds will be judiciously utilised under his able watch.”

While calling for a probe of the incident, Lagos CAN said this would inspire more confidence among residents and visitors to Lagos.

They made the donation when they visited the governor.

Ikazoboh announced the donation of N100million worth of cement for the reconstruction of the damaged part of Abule Ado.

Zenith Bank donated the same amount for the care of victims of the disaster, even as Onyeagwu pledged more in due course.

Sanwo-Olu expressed appreciation for the donations.

Some of the victims of the explosions appealed for government’s support to enable them to rebuild their property.

The residents spoke in separate interviews with News Agency of Nigeria (NAN) during the enumeration exercise for victims by LASEMA officials.

One of the victims, Mr Adeniran Iyiola, who resides at No, 3, Kehinde Oyerinde St. Off Ganiu Adams St., said his house roof was blown off.

He pleaded with the state government to support his family.

Mr Paul Efon, another resident, said the entire roof of his building was destroyed.

Mrs Chinwe Odemezue said she had been devastated since the incident occurred, thanking God that all her family members were alive.

NAN reports that a total of 16 streets were affected by the explosion, including Basil Offia, Bishop, Abegbeji, Ganiu Adams, Kehinde Cele and Philips Obun, among others.