Lagos Explosion: I have never seen this before, It is like a war zone – Sanwo-Olu 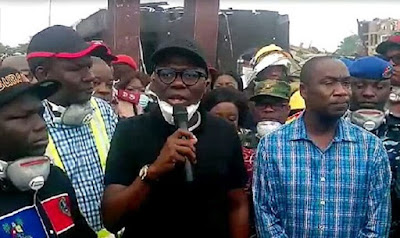 Lagos State governor Babajide Sanwo-Olu has described the Abule-Ado explosion as a situation he has never seen before.

The governor also described the scene of the explosion as a ‘war zone’.

Sanwo-Olu said this during an assessment of the scene of the explosion on Monday morning alongside his deputy, Obafemi Hamzat.

“I must confess I have never seen anything of this magnitude before, it’s like a war zone,” Sanwo-Olu said during the inspection.


He also inspected the Bethlehem Girls College in Abule Ado, which was completely destroyed by the explosion.

Following collateral damage caused by the unfortunate explosion Sanwo-Olu said he has set up a N2 billion relief fund to alleviate losses suffered by victims.

Sanwo-Olu, however, on behalf of the state government, announced the donation of a N250 million as capital base for the relief fund.