Klopp reacts as Liverpool lose 3 of their last 4 matches 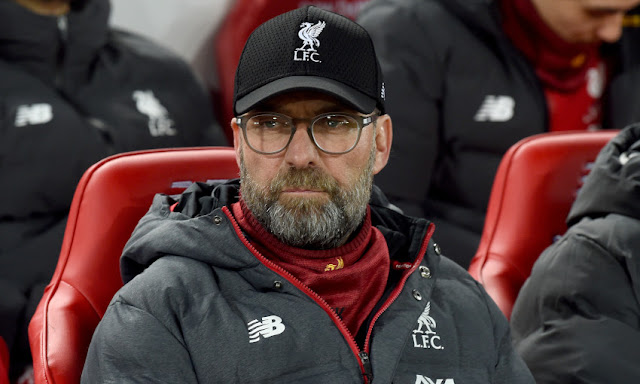 Jürgen Klopp acknowledged Liverpool must make improvements defensively if they’re to return to top form after they were beaten 2-0 by Chelsea in the FA Cup on Tuesday night.

Goals from Willian and Ross Barkley secured victory for the hosts at Stamford Bridge and ensured Liverpool bowed out at the fifth-round stage of the FA Cup.

Willian opened the scoring in the 13th minute and Barkley’s second-half run confirmed Chelsea’s spot in the quarter-finals of the competition.

Below is what Jurgen Klopp told Liverpool.com on his thoughts on the game against Chelsea:

Losing 2-0 is not cool, but in this case, it is relatively easy to explain – we made two massive mistakes around the goals. Adrian made a super save a second or two seconds before and then this ball, a really good shot from Willian and he could not make that save. But before that we lost the ball and that’s a problem. It was not the biggest shock because it is football. I liked the reaction, liked the way we played, some good stuff, it was a super-intense game and both teams were really running like mad.

It was clear it would be difficult, but we had our moments, we had good chances, especially the one where I don’t know who saved the balls – a defender or the goalie or whatever – when we shot three or four times. We conceded a second one and that didn’t help obviously and it was then a bit more difficult to take. Chelsea defended with all they had, threw the bodies in, really physical. We couldn’t score, they couldn’t score and so the game finished with 2-0 and we are out of the competition, which is the opposite of what we wanted.


On three defeats in the last four matches…

Look, it went our way for so long because we defended outstandingly. Usually you don’t get a lot of chances against us and stuff like this, but now we have to admit that in the last three games – [maybe] four – we have conceded absolutely too many goals, that’s true. From completely different situations, so it is not one problem, but we see it as well.

I am not worried about the momentum – momentum is not something you get as a present, you have to get it to keep it. We have always a chance to get it back.


On the recent performances of his side…

The performance tonight was completely different [than] at Watford. Against Watford it was really bad, tonight it was not bad. Tonight it was a really super-intense game. We made seven changes and we knew it would be intense and that’s why we made the changes because it was clear a lot of sprints, spaces in midfield. How Chelsea plays, how we want to play, it was clear you need accelerations constantly. They offer that constantly and that’s why we had to make the changes, or we thought we have to make them.

That performance tonight, I am not concerned about [it]. That’s football, if you make decisive mistakes then you lose football games.