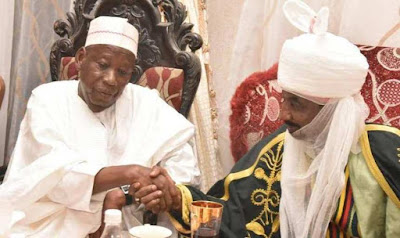 The Arewa Consultative Youth Forum, ACYF, has reacted to the dethronement of the Emir of Kano, Muhammadu Sanusi II.

The Kano State Government under Dr. Umar Abdullahi Ganduje, on Monday, announced the immediate removal of Emir of Kano Muhammadu Sanusi ii as the Emir of Kano.

The Alhaji Shettima Yerima-led ACYF said although they were not in support or happy about the removal of an Emir, it was wrong for a traditional ruler to be involved in partisan politics, disrespect the higher authority or mismanage the emirate as Sanusi is accused.

Usman Alhaji said the Emir was removed for his total disrespect to the lawful instructions from the government and the lawful authorities.

But Alhaji Shettima Yerima, the Arewa youth leader, in a chat with DAILY POST on Monday in reaction to the development, warned that this will serve as a deterrent to other traditional rulers.

He said, “The traditional institution should not be run by those who are in politics. The politicians should be allowed to do their jobs while the traditional institutions provide neutral fatherly advice and not to get themselves involved in politics. That was the allegation against him that laws surrounding institutions were not fully complied with. We do not support the dethronement of an Emir but it would serve as a deterrent to others.

“We are not happy with the situation because an institution such as the Kano Emirate that has been there for thousands of years should be respected. We hope this does not happen again in the future and it should serve as a deterrent for others in the traditional system.

“The traditional institution should not be a place for them to play their dirty games. The traditional ruler should be there to play a fatherly role to everybody by not taking a side or being partisan so that the system will be more respected.

“With what has happened, it is not just about the individual but about the institution. The Governor will not stay forever. He’ll go and someone will succeed him but the throne is the problem that all of us must protect and see that it is respected.”