Kano assembly suspends 5 members for ‘attempting to snatch the mace’ 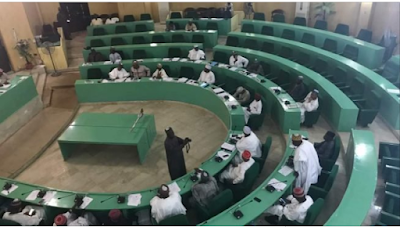 Kano state house of assembly has suspended five of its members for allegedly attempting to steal the mace — the institution’s symbol of authority.

Some members, last Monday, attempted to disrupt the sitting of the assembly after an ad hoc committee to investigate Muhammad Sanusi II, deposed emir of Kano, was set up.

The lawmakers were said to have disagreed over the one-week deadline given to the committee to present its report.

The affected members are from the All Progressives Congress (APC) and the Peoples Democratic Party, and they were suspended for a period of six months.

Abdulazeez Garba Gafasa, speaker of the assembly, who announced the suspension at the resumption of plenary on Monday, said the lawmakers acted against the rules of the house.

“The five members were suspended for violating the rules of the house especially Order IV Sub 4 a, b, d and e disrupted the sittings of the house and prevented proceedings from going on,” he said.

“They behaved violently and even attempted to snatch away the mace in a clear attempt to sabotage the sitting of the house.”