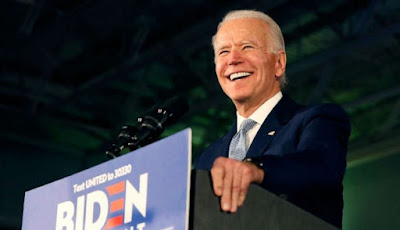 As of Monday afternoon, Biden led with nearly 38 per cent of the statewide vote, compared with about 36 per cent for Vermont Sen. Bernie Sanders.

There was a gap of 23,000 votes. Biden’s lead had expanded since the two rivals ended election night March 10 in a virtual tie.

The delayed victory – which came amid record turnout for a Washington presidential primary – means Biden won five of the six states that voted March 10.

Washington has 89 pledged delegates to the Democratic National Convention at stake – the second most of any state that voted last week.

It’s not a winner-take-all system, and the delegate breakdown between Biden and Sanders will depend on results from the state’s 10 congressional districts.

Will Casey, a spokesman for the state Democratic Party, said the party would know the delegate split once the election is certified next week.

The Associated Press and New York Times called the race for Biden after 5:00 p.m. local time Monday after a new round of vote counts in King County and elsewhere showed Biden’s lead holding, and the vast majority of ballots counted statewide.

In a statement, the Biden campaign said, “Washingtonians sent a message to the rest of the country: This is the campaign that will send Donald Trump packing.”

A month ago, Sanders had been the leading candidate in a crowded field of Democrats competing for the chance to face President Donald Trump this fall.

The balance of the race shifted after Biden’s dominant victory in the South Carolina primary Feb. 29.

He followed that with a series of victories Super Tuesday, March 3, including in states Sanders had carried in 2016, such as Michigan and Minnesota – and now Washington.

“The fact that you have state after state that Sanders won in four years ago, but didn’t win in 2020, just really shows the kind of shift in the Democratic Party post-South Carolina,” said Dean Nielsen, a Seattle-based Democratic political consultant.

“I think Democrats looked around and decided Biden was more electable than Sanders, and cast their votes accordingly.’’

About 2.2 million votes had been counted in the March 10 primary as of Monday – or about 48 per cent of the state’s registered voters.

That set a record for a presidential primary here, beating out the 2000 primary that drew about 43 per cent.

More than 1.5 million of the votes were cast in the Democratic primary, which had 13 candidates on the ballot, compared with about 670,000 in the Republican primary, which included only Trump.
Sanders’ case for the nomination has rested in part on the argument he’d bring enthusiastic turnout among younger voters, but turnout nationally and here has not been enough to put him over the top.

There was also a substantial gender gap. About 56 per cent of Democratic voters statewide were women, compared with 49 per cent of those who chose the Republican ballot.

Biden’s victory came in spite of Sanders’ energetic core of volunteers in the state, many of them loyal since his 2016 presidential bid, when he fell short of the Democratic nomination to former Secretary of State Hillary Clinton.