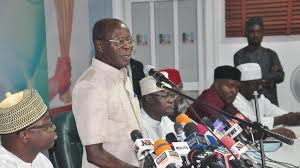 The National Chairman of the ruling All Progressives Congress (APC), Comrade Adams Oshiomhole, has described the Supreme Court’s review of its earlier decision of the Imo State governorship judgement as “not unexpected”.

The APC National Chairman, who spoke to State House Correspondents after a meeting with President Muhammadu Buhari on Tuesday evening at the Presidential Villa, Abuja, explained that the earlier action of the court in the Bayelsa State similar review had provided an indication to what should be expected in the Imo matter.

Oshiomhole, who expressed delight in the outcome of the review the Imo governorship judgement, noted that the review was just consistent with the Supreme Court’s body language in similar matters that had come up in recent times.

He, however lashed out at the People’s Democratic Party (PDP) for thinking it could get anything different from the decision of the Supreme Court, pointing out that its candidate, Hon. Emeka Ihedioha, failed to get required votes and spread in the election.

“If that is the tradition of the court, unless they want to be changing it every other day I do nothing what has happened today was strange.

“We know that Ihedioha did not have the required number and that is a fact that nobody has ever disputed. How anybody thought he can impose someone who did not meet the spread is only known to PDP because, they specialize in rigging and they see rigging as their birth right.
And that is why they could have the guts to be protesting in front of foreign embassies as if Nigeria is a colony under the supervision of some foreign powers.

“So I think what the Supreme Court has done today is just to reaffirm that they are supreme and whatever they did the last time was on the basis of what was before them. They did not make mistakes, there are no gaps, no ambiguity and therefore there was no basis to reproach them to sit on the appeal in their own judgement.

“I think they are just being consistent with the position they took in previous cases. Of course as a party chairman, APC members and indeed all democrats and all those who believe in the rule of law, who believe that as imperfect as the Supreme Court can be, they remain Supreme.

“We are happy and we thank God that the whole litigation process has come to an end. Because like Justice Amina Augie said in that judgement that there has to be an end to litigation, and I cannot agree less so that the people of Imo state can relax, seat back and work with their governor and that all hands are on deck to fill up the gaps so that Imo people will witness sustainable growth and development”, he said.