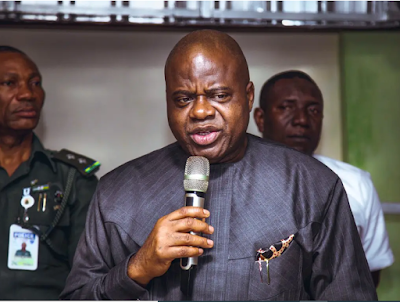 The Bayelsa State Governor, Senator Douye Diri, has declared that his government is not a weak one, warning that nobody should take laws into their hands under any guise.

The Governor who also stated that any form of lawlessness will not be condoned in the state accused the National Chairman of All Progressives Congress (APC), Adams Oshiomhole and the Minister of State for Petroleum, Chief Timipre Sylva of creating the post Supreme Court Judgement’s violence that led to the destruction of key Peoples’Democratic Party (PDP) faithful property in the state.

Diri mentioned this yesterday during the inspection visit to some of the property destroyed during the protest that erupted in the state after the Supreme Court invalidated the election of the former governor-elect, Chief David Lyon and deputy, Senator Biobarakuma Degi-Eremienyo and declared Senator Douye Diri and Lawrence Ewhrudjakpo as the governor and deputy governor respectively for the state.

The governor visited the destroyed property, including the home of the immediate past governor, Seriake Dickson, Steve Azaiki public library, PDP Secretariat, Governor Diri’s private home, radio Bayelsa and other property destroyed during the protest.


He said: “Because of what the APC national chairman said in Abuja where he declared that the Supreme Court which is the apex Court in the land, having giving the ruling, that it will not stand, and declared that there will be no governor in Bayelsa state, that was what ignited protest back home here.

“APC is always associated with violence, you recalled that two days to my election, I went to campaign in Nembe local government, and we were attacked just to go and campaign, and we lost about 20 of our party faithful, and here on the 13th February, after the apex Court had given their Judgement, PDP faithful were visited on their own property.

“Radio Bayelsa is the public property of Bayelsa state, so assuming the APC were governors, wouldn’t they use the same radio Bayelsa, the judiciary is the property of the Bayelsa state, assuming they were governors, wouldn’t they go to Court, and then they now picked PDP strong supporters and faithful, they visited Steve Azaiki library, when you see the level of destruction there, you begin to wonder, even at war, there are certain places that are marked as sacred, Churches, schools, libraries are not touched.

“But you begin to wonder if these people are from the Stone Age, a library was touched to that level, I am short of weeping and crying for our state, Bayelsa.

“If we value these projects, we are talking of millions of naira, money that we would ordinarily use for development and for the empowerment of our youths and our women, scarce resources that we don’t have now, we need to now cut out for radio Bayelsa to operate, for judiciary to operate and of course for others whose property were damaged.”

“Even after I have been sworn-in, the Minister of state for Petroleum, who is the leader of APC in the state, after making a statement that was very suspicious to most of us, when he called for calm, declared that the governor of Bayelsa state is illegitimate, and when a man who is occupying such an exalted position make such a statement, what do you expect from the followers, it’s the damages we have seen,” he said.