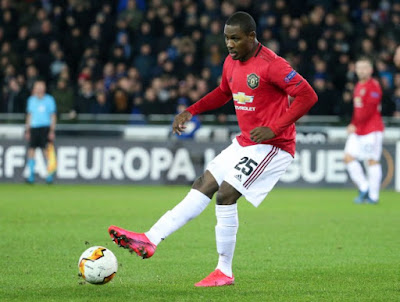 Former Super Eagles striker, Odion Ighalo, has been described by Steve McClaren as the perfect striker for Manchester United, as the former Old Trafford legend tipped the Nigeria international to be handed a starting role in the Manchester derby on Sunday.

Ighalo, who started his second game for the Red Devils since joining on loan from Shanghai Shenhua on January deadline day, had an impressive performance on Thursday in the Red shirt as he scored a brace in their 3-0 win at Derby County in the FA Cup fifth round tie.

Reacting to the display of the 30-year-old, the former England head coach, who was part of the United coaching staff when they won the treble in 1999, was confident that United had found the right number nine in Ighalo and said he would not be surprised if the former Watford striker got to start in the derby against their local rival on Sunday.


“There can be runners but there has to be a vocal point, Manchester United didn’t have that.

“Romelu Lukaku went, they’ve tried different things, false nine, it doesn’t work out, but I think with Ighalo it’s perfect because there’s lots of energy around him at the present moment and wouldn’t be surprised to see him play on Sunday.”

Ighalo has now scored three goals in six appearances in all competitions for United.

Odion Ighalo was included in the Emirates FA Cup Team of the Fifth Round.

The Team of the Round was compiled by football facts and statistics website, whoscored.com.

Ighalo’s inclusion was as a result of his superb performance for United in their 3-0 win at Derby County on Thursday.

The 30-year-old bagged a brace in his second start since joining United on loan.

He has now scored three goals in six appearances in all competitions for the Red Devils.

Norwich have the highest number of players in the team of the fifth round following their victory over Tottenham Hotspurs. Goalkeeper, Tim Krul, defenders, Ben Godfrey and Jamal Lewis are the players selected from the team.