How I recovered N800m from corrupt Imolites – Uzodinma 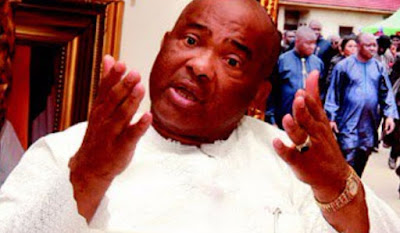 The governor said that in the last two months of his assumption of office, he had beamed a searchlight on ISOPADEC as parts of the bold steps to stop the continuous mis-appropriation and embezzlement of fund in the commission.

The governor made the revealation at the palace of the traditional ruler of Mmahu community in Ohaji Egbema while meeting with stakeholders in the oil rich Ohaji Egbema local government area of Imo state.

He also lamented the alleged misappropriation of funds by the elites and leaders of the area saying, the huge sum was actually part of fund meant for the development and growth of the oil communities.


He, therefore, vowed that his administration will not support any anti- people policies as he would ensure that monies and allocation meant for the people of oil producing communities are judiciously used for the development of the area.

In his words “My interest is to protect your own interest, only two months I took over as Governor, I have N800 million saved from ISOPADEC, but before now, you don’t get the money, they bring the money and the leaders  share it leaving the people to die in hunger and poverty,

“But if we save that money, we come here and call a meeting, the communities will choose the project they want, we will award the project and make sure the projecst are done”.

Further, the governor reiterated that his administration will continue to ensure a lasting peace in the oil-rich Ohaji/Egbema Local Government area of the state.

Uzodinma appealed to the leaders of Ohaji Egbema to  differentiate the right from wrong by helping the youths to desist from thuggery and other social vices that cause instability in the area.

Earlier, the traditional ruler of Mmahu community, in Ohaji Egbema, his royal highness Austin Iwuogu while commending the governor for his timely visit to the area, enumerated some of the challenges faced by the people of the community as a result of activities of oil companies in the area.

Against this backdrop,  the monarch appealed  to the governor for intervention as quick as possible to ameliorate the sufferings of the people.