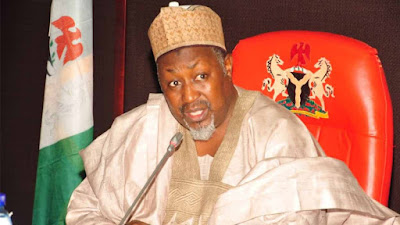 The Jigawa State Governor, Alhaji Muhammad Badaru Abubakar, has wept bitterly while condoling the families of the 22 accident victims killed on Monday.

Senior Special Assistant to the Executive Governor of Jigawa State on New Media, Auwalu Danladi Sankara stated this in a press statement issued in Dutse.

He explained that the Governor who was on his way to Gumel also witnessed the terrible incident that claimed the lives of twenty-two passengers including children.

Badaru said the incident will forever remain unforgettable in his mind and was the first of its kind in Jigawa State.

He said it was great loss to the Jigawa people and Nigeria in general.

The Governor prayed for the deceased and the families for fortitude to bear the loss.

He, however, noted that state government will give all the necessary assistance to the family of the deceased.

He said the deceased were given mass burial at the scene of the accident.

He explained that the acccident occurred Monday 09/03/2020 at about 1130 hrs along Jahun, Kiyawa raod in Jigawa state.

“The incident happened when the tyre of a Hummer bus with registration number YD183 HJA driven by one Ayuba m, 36 years of Afasha village in Jahun LGA conveying passengers to Shuwarin Monday market burst”.