Fidelity Bank on Thursday revealed that one of its staff who returned from a holiday in the United Kingdom has tested positive for coronavirus.

The bank noted that the individual had embarked on self-isolation upon his arrival in the country in line with its policy that mandates staff/family members who have travelled overseas in recent time to self isolate for 14 days and test for the virus before returning to work.


“Fidelity Bank mandates staff or immediate family member(s) who travel out the country to self-isolate for two weeks and obtain medical clearance before returning to work as part of our COVID-19 preventive and precautionary measures,” the statement signed by Charles Aigbe, the bank’s divisional head for brand and communications, read.

“This process was activated and strictly adhered to by one of our staff members who returned from holidays in the United Kingdom.

“He was in self-isolation and underwent testing in line with the bank’s policy. The test results returned positive at the weekend and we quickly arranged for him to be moved to the Nigeria Centre for Disease Control (NCDC), where he is currently being attended to by health officials.”

According to the bank, two other members of staff who received gifts from the individual have also been made to self-isolate and the office where they work has been temporarily closed.

The bank said no customers were identified in the contact tracing that was carried out.

Also, the bank said it has shut down its business office at the federal secretariat in Abuja and advised all staff/vendors to self-isolate and go for testing in line with its policy on COVID-19, on account of possible exposure of a vendor staff.

The bank said it is carrying out other measures like reducing the number of staff expected to report physically at work and number of customers allowed at a time in the banking hall to a maximum of five to curb the spread of the virus.

SEE THE STATEMENT RELEASED BY FIDELITY BANK BELOW: 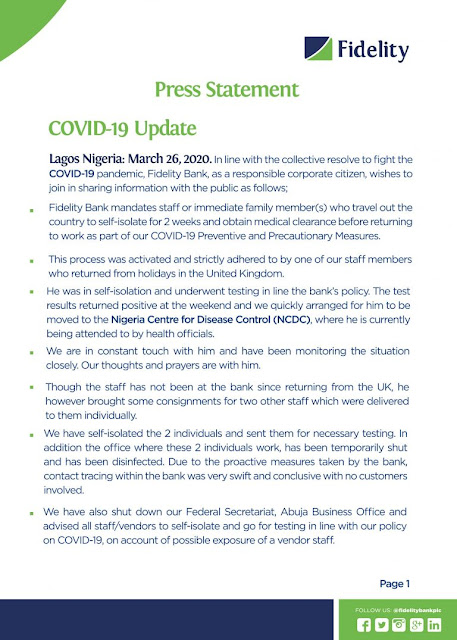 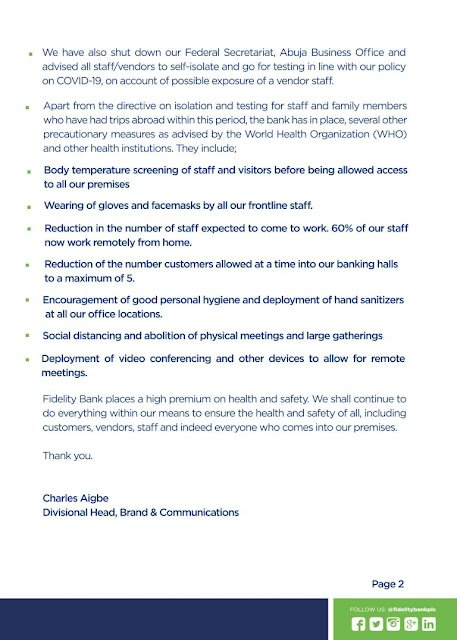