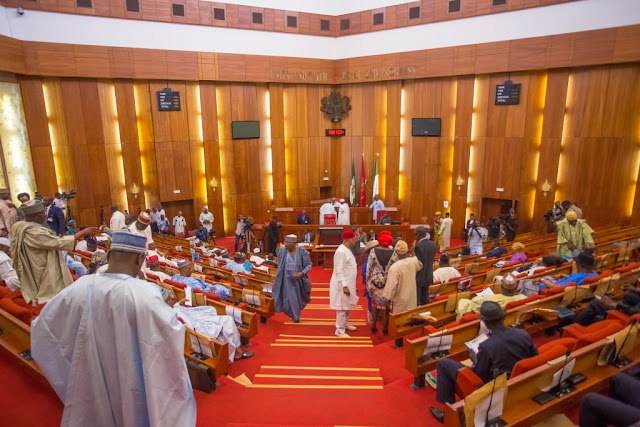 Fear heightened on Monday over the fate of about 35 senators who have not complied with the measures to determine their Coronavirus Disease (COVID-19) status.

The senators last week returned from a trip to the United Kingdom (UK), where they attended a Petroleum Industry Governance Bill (PIGB) seminar in London.

It was learnt that they were caught in the web of coronavirus outbreak in the UK at a time the Federal Government directed that those returning from any of the COVID-19 high-risk countries should self-isolate for 14 days.

It was gathered that other senators are pressuring Senate President Ahmad Lawan to prevail on their colleagues to excuse themselves from the chamber’s business.

Some of them (senators) were also said to be pushing for COVID-19 test for their colleagues.

The senators are members of the Senate Committees on Upstream, Downstream and Gas.

Two female senators are among those on the trip.

It was learnt that since the senators returned on March 14, they had been coming to the chamber to participate in legislative activities.

A source, who spoke in confidence, said: “When the senators returned to the country, the President of the Senate tactically told them to go into self-isolation for 14 days. But most of them ignored his advice.

“In fact, the senate president refused to either hug or shake hands with them to the consternation of the affected senators.

“Now, we have a big challenge in the Senate. Some of us are pushing that these Senators should rescue themselves from all the activities in the chamber.”

Although a senator confirmed some of his colleagues had just returned from the UK, he was quick to add: “Some of them have actually gone for test to confirm their status.

“When we meet on Tuesday, we will be able to ascertain their real status and the next steps the chamber should take to protect the hallowed chamber.”

There were indications that the executive was worried about non-compliance of the Senators with the guidelines on the management of COVID-19.

A source in government said: “There are no records that some of them went into self-isolation or test.

“I think the government has sent the necessary advisory to the leadership of National Assembly on the need for the senators to respect the rules and regulations on COVID-19.”

When contacted, Information and Culture Minister Lai Mohammed said: “I’m not aware that some senators travelled abroad and that rather than go into self-isolation, went into hiding.

“But I know that the leadership of the National Assembly has directed that all its members that have just come in from any of those countries should self- isolate for 14 days.

“Our appeal is that such members will heed the directive.”