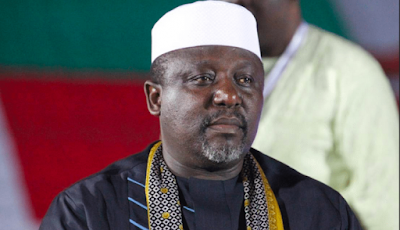 In a bid to avoid the prying eyes of security operatives, former Governors Rochas Okorocha, Theodore Orji and Jonah Jang avoid their allocated offices in the Senate.

These former governors with pending Economic and Financial Crimes Commission, EFCC always leave the Red Chamber straight to their Houses.

Several attempts made by newsmen to even have a peep at former Rochas Okorocha who held sway as Imo State Governor for eight years proved abortive.

However it was discovered that this was not associated with Former governors alone  but some long serving senators stealth into the chamber and dash out.


An aide to one of the Senators said ”what do you expect, this men conduct the affairs of their offices via the telephone they don’t even need an office.

“Oga constituents come here and wait endlessly for him and leave here more frustrated because he does not even pick their calls.

Former Governor Orji of Abia since the bubble bust on his alleged money laundering story has stopped coming to National Assembly.

Technically, Eyninnaya Abaribe is the only the Senator standing for Abia state as Senator Orji Kalu is still resting in Kuje Prison.

Former Gov Jang of Plateau state is hardly on ground too as he has pending files with the anti-graft agency.

See their case files below:

The commission said it was interested in Rochas Foundation and other property converted by individuals for personal use in Imo.

*This is one among his pending cases.

Theodore Orji: Alleged diversion of over N521bn to personal use