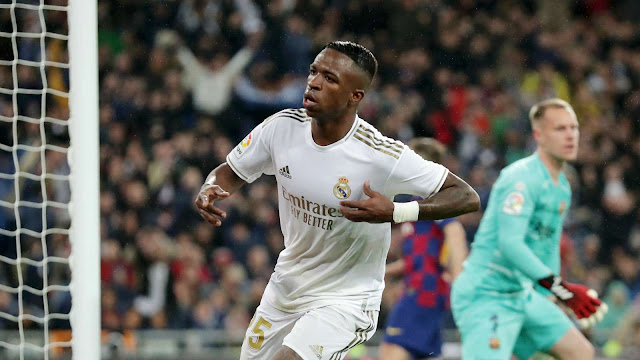 Vinicius Junior broke Barcelona's resistance and substitute Mariano Diaz added a second as Real Madrid leapfrogged their bitter rivals at the top of LaLiga with a 2-0 win in Sunday's Clasico.

December's reverse fixture finished goalless for the first time in 17 years and that was the way this latest tussle at Santiago Bernabeu was heading until Vinicius struck with a deflected effort.

Thibaut Courtois and Marc-Andre ter Stegen made vital saves with the game at 0-0 and both teams had efforts stopped on the line.

But Vinicius found a way through 19 minutes from time and Mariano added a second late on to end Madrid's seven-match winless league run in this fixture as Zidane's side moved a point clear at the summit.