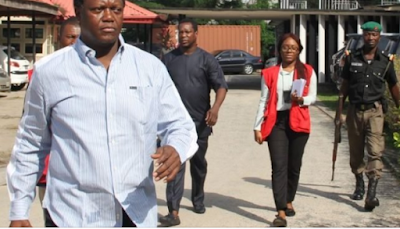 The Economic and Financial Crimes Commission, (EFCC) has re-arraigned Uyiekpen Giwa-Osagie, a lawyer to former Vice-President, over alleged money laundering.

Osagie was arrested on August 8, 2019, and arraigned alongside Erhunse Giwa-Osagie, his younger brother, on three counts of money laundering before Nicholas Oweibo, a judge of a federal high court in Lagos.

Upon the transfer of the case file from Oweibo, the suspects were re-arraigned before Chuka Obiozor, in October 2019.

On Friday, March 6, 2019, the defendants were brought before Chukwujekwu Aneke, a judge of the same court.

The EFCC accused the two brothers of  making a cash payment of $2 million without going through a financial institution in the buildup to the 2019 general election.

The EFCC said the amount which exceeded what is authorised by law, was meant for the 2019 elections.

They both pleaded not guilty to the charges preferred against them.

Following an application by Ahmed Raji, their lawyer, the Giwa-Osagie brothers were allowed to continue enjoying the bail earlier granted them by Oweibo, the former judge.

Meanwhile, the court has fixed March 9, for ruling on Atiku’s lawyer’s application for permission to travel to London for medical treatment.