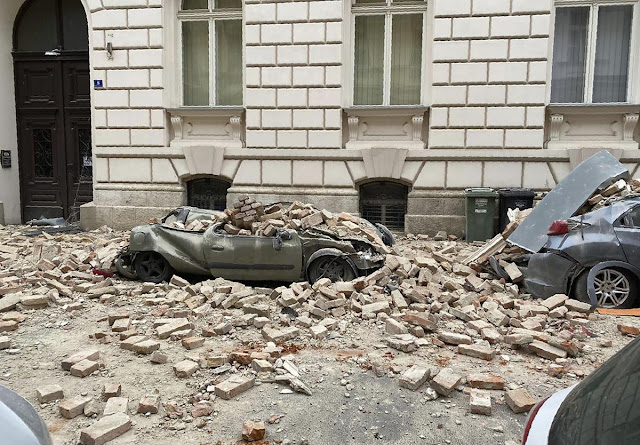 A 5.3-magnitude earthquake tore down chunks of buildings in Zagreb and left a teenager in critical condition on Sunday, state media reported, as authorities warned residents not to gather together and further spread the coronavirus.

The quake, the most powerful to strike the Croatia capital in nearly 140 years according to Prime Minister Andrej Plenkovic, jolted the city at around 6:00 am local time (0500 GMT), sending panicked residents running out onto streets, according to an AFP journalist.


The tremors snapped the spire of an iconic cathedral in Zagreb’s old centre and knocked down slabs of buildings that crushed parked cars under piles of bricks.

Amid the confusion, a 15-year-old boy was initially reported dead but Zagreb’s hospital director later said the victim was a girl who remained in critical condition, state-run HINA agency reported.

Meanwhile, authorities urged citizens not to gather in groups outside to avoid further spreading of the new coronavirus.

Croatia has detected more than 200 infections.

“Keep your distance. Don’t gather together. We are facing two serious crises, the earthquake and the epidemic,” said Interior Minister Davor Bozinovic.

Standing in a park in front of his Zagreb apartment building, 50-year-old resident Neven Horvat said he was jolted awake by the powerful tremors.

“My first thought was ‘Oh my God! This is the last thing we need with the coronavirus'”, he told AFP.

The earthquake was also felt in southern Austria and Slovenia.

The Balkan region lies on major fault lines and is regularly hit by earthquakes.