COVID-19: Surrender yourself for test if you are sure of your status – PDP tells Yahaya Bello 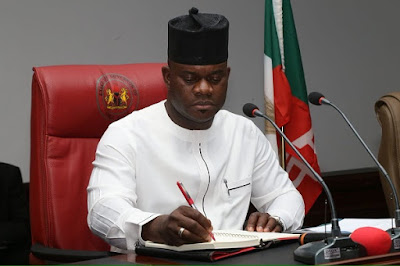 The Kogi State chapter of the Peoples Democratic Party, PDP, has advised Governor Yahaya Bello to immediately subject himself to the Coronavirus test, having had contact with Abba kyari, the Chief of Staff to President Mohammadu Buhari.

The PDP in a statement signed by its Director Research and Documentation, Achadu Dickson, said that the fight against the dreaded Covid-19 virus can only be won when stakeholders show responsibility beyond lip service, and urged those who had contact with the CoS to the President to go for test.

Kyari was one of the top Federal Government officials that graced the three days prayer for the late mother of Governor Bello, Hajia Hawau, last week, in Okene.

Recall that speculations had gone viral that Bello tested positive with some social media platform saying that he has gone into self-quarantine.


The governor and his Commissioner for Health, Dr. Saka Haruna, have however debunked the rumour.

Haruna said the news of Bello testing positive for the virus is incorrect, and called on the public to ignore such.

The Commissioner had said, “That is incorrect; please ignore such lies.”