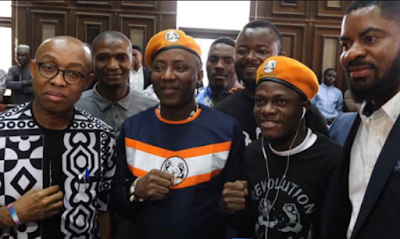 A Federal High Court sitting in Abuja has adjourned the trial of the Convener of #RevolutionNow movement, Omoyele Sowore, and his co-defendant, Olawale Bakare.

Justice Ijeoma Ojukwu adjourned the trial until April 1 and 2 in a ruling on Wednesday following the objection raised by the counsel to the defendants, Femi Falana.

Falana had challenged the testimony of the first witness presented by the prosecution, for giving evidence outside his written statement.

But the prosecutor, Kayode Halilu, insisted that he served a summary of the witness statement on the defendants’ counsel and the witness.


The witness is one Rasheed Olawale, a Principal Staff Officer of the Department of State Services (DSS) in charge of Surveillance and Communication Intelligence at the Lagos State Command.

After listening to both counsels, the trial judge ruled that the witness cannot be allowed to depose to a four-paragraph statement and give a 10-page of evidence.

She subsequently adjourned the trial to enable the prosecutor to reproduce the witness’ statement.

Sowore and Bakare are facing trial over treason and money laundering charges filed against them by the Federal Government.

They have, however, pleaded not guilty and have since been granted bail by the court.

The government had filed a motion on notice praying the court to grant an order excluding persons other than lawyers and accredited members of the press from witnessing the proceedings.

It also sought an order to clear the court whenever the prosecution witnesses were testifying, such that only the trial judge, parties and legal representatives, as well as accredited members of the press, would be able to see them.

The prosecution also asked for an order that the real names and addresses of the prosecution witnesses in the proceedings should not be disclosed.

Shortly before Sowore and Bakare’s trial began on Wednesday, Justice Ojukwu adjourned ruling on an application by the prosecution seeking to have witnesses shielded in the trial of the defendants.

This followed the request of Halilu who informed the court that the defence team served him a counter-affidavit and he needed time to reply to it.