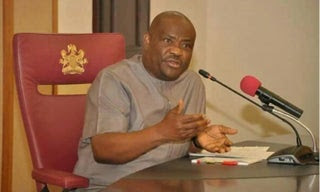 The Rivers State Government has announced the closure of air, sea and land borders into the state with effect from Thursday, March 26, 2020.

Governor Nyesom Wike, who made this announcement in a state broadcast on Wednesday, said the move was to further check the spread of coronavirus to the state.

It was earlier reported that the Nigerian Civil Aviation Authority had recently banned international flights into the country’s airports, including the Port Harcourt International Airport.

However, local flights were allowed to operate at the airports.


But Wike threatened that passengers would not be allowed into the state after landing at the Port Harcourt airport.

He said, “The State Security Council has taken the following painful decisions: With effect from 6pm on Thursday, March 26, 2020, the Port Harcourt International Airport, Omagwa, will not be open to air traffic.

“While we may not have the right to stop flights from entering Port Harcourt, we cannot allow anybody coming from the airport to enter our state. We are confident that the Federal Airports Authority of Nigeria and other federal agencies will cooperate with us. All land and sea borders will be closed.

“Vehicular movements in an out of the state have been banned. In essence, no vehicle will leave Rivers State for any other state and no vehicle will be allowed to enter the state. New measures will be put in place until further notice.

“Let me reiterate that security agencies have been empowered to strictly enforce this directive. There will be no room for sacred cows because the virus is no respecter of persons.”

The governor earlier announced the closure of the biggest market in Port Harcourt – Oil Mill Market.