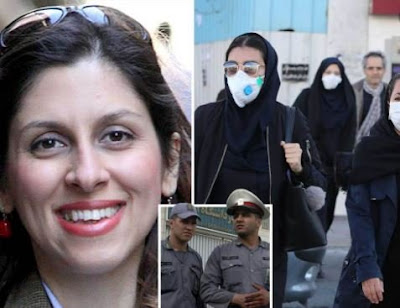 Iran has temporarily released more than 54,000 prisoners in an effort to battle the spread of the new coronavirus disease in crowded jails.

Judiciary spokesman Gholamhossein Esmaili told reporters that the inmates were granted furlough after testing negative for Covid-19 and posting bail.

“Security prisoners” sentenced to more than five years will not be let out.

The jailed British-Iranian charity worker Nazanin Zaghari-Ratcliffe may be freed soon, according to a British MP.


Tulip Siddiq cited the Iranian Ambassador to the UK as saying that Ms Zaghari-Ratcliffe “may be released on furlough today or tomorrow”.

Her husband said on Saturday that he believed she had contracted Covid-19 at Tehran’s Evin prison and that authorities were refusing to test her.

But Mr. Esmaili insisted on Monday that Ms Zaghari-Ratcliffe had subsequently been in contact with her family and “told them about her good health”.

Ms Zaghari-Ratcliffe was jailed for five years in 2016 after being convicted of espionage charges that she has denied. The UK has also insisted she is innocent.

A Foreign Office spokesman said: “We call on the Iranian government to immediately allow health professionals into Evin prison to assess the situation of British-Iranian dual nationals there.”

There have been more than 90,000 reported cases of Covid-19 worldwide and 3,110 deaths since the disease emerged late last year – the vast majority in China.

The outbreak in Iran has killed at least 77 people in less than two weeks.

Yesterday, the health ministry said the number of confirmed cases had risen by more than 50% for the second day in a row. It now stands at 2,336, although the real figure is believed to far higher.

A number of senior Iranian officials have contracted the virus. Among the latest is the head of the emergency medical services, Pirhossein Kolivand.

Twenty-three of the 290 members of parliament have also tested positive.

On Monday, a member of the Expediency Council, which advises Supreme Leader Ayatollah Ali Khamenei, died as a result of Covid-19 in Tehran. State media said Mohammad Mirmohammadi, 71, had a close relationship with Ayatollah Khamenei.

At a tree-planting ceremony to mark World Wildlife Day yesterday, the supreme leader urged the public to observe the health ministry’s hygiene guidelines and ordered all government bodies to provide any necessary help to the health ministry.

Ayatollah Khamenei also insisted Iranian authorities were not concealing information about the scale of the problem, saying: “Our officials have reported with sincerity and transparency since day one. However, some countries where the outbreak has been more serious have tried to hide it.”

Iran’s outbreak, he added, “will not last long in the country and will pack up”.

Teams will visit patients who are suspected of being infected with Covid-19 and who do not have access to medical services.

A team of experts from the World Health Organization (WHO), who arrived in Iran on Monday, is supporting local health authorities.

The WHO said they would “review readiness and response efforts, visit designated health facilities, laboratories and points of entry, and provide technical guidance”.

The plane carrying the experts also contained a shipment of medical supplies and protective equipment to support more than 15,000 healthcare workers, as well as enough laboratory kits to test and diagnose almost 100,000 people.