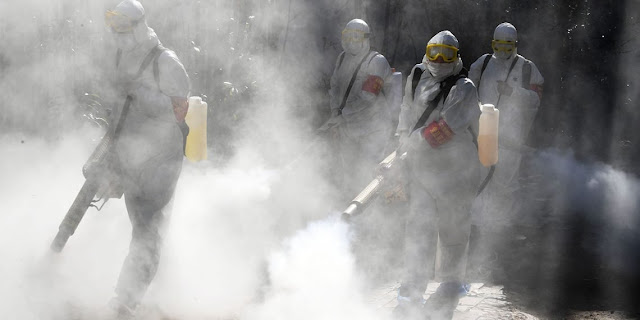 An intense fumigation of the State House, including the office of President Muhammadu Buhari, commenced Thursday morning.

NigerianEye gathered that the exercise started about 9:30am and would be spread throughout the entire stretch of the offices within the State House quarters.

According to a Presidency source, fumigators, who were reportedly dressed in white overalls, masked and kitted heavily, were moved in from a place outside Abuja.


The source said at about 11:30am, the fumigation process had reached the main building, where the office of the President is located.

“These people are not from the Villa. They came from outside from the town (Abuja city). They are dressed in complete white overalls, masked and wear other protective gears”, the source said.

He noted “the dressing is similar to how the National Centre for Disease Control people wear their protective gears”.

Another official of the State House, who also spoke anonymously, however noted that he believed the decision to cut down on the number of officials gaining access into the premises might have been for such a reason, for space.