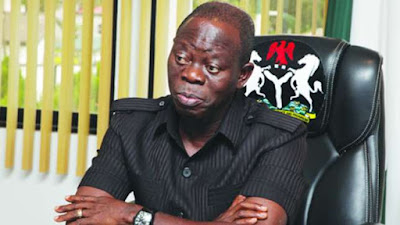 There was confusion on Thursday as two courts of equal jurisdiction, in a space of 24 hours, gave contradictory orders on the embattled National Chairman of the All Progressives Congress, Adams Oshiomhole.

Justice A. Lewis-Allagoa, sitting at the Federal High Court in Kano on Thursday, voided the suspension of Oshiomhole as a member of the APC.


He also held that the Independent National Electoral Commission should not recognise anybody, except Oshiomhole, as the APC national chairman.

Justice Lewis-Allagoa’s ruling came a day after Justice Danlami Senchi of the High Court of the Federal Capital Territory, Jabi, made an order suspending Oshiomhole as the national chairman of the APC.

Justice Senchi had premised his order suspending Oshiomhole as the APC national chairman on the November 2, 2019 resolution of the Ward 10, Etsako West Local Government Area.

Justice Senchi held that Oshiomhole could not continue to function as the APC national chairman when he had been suspended by his ward.

The Abuja judge ordered Oshiomhole to stop parading himself as the APC national chairman, and ordered the APC to deny him access to the party national secretariat

But on Thursday, Justice Lewis-Allagoa held that the November 2, 2019 “purported resolution of the Ward 10, Etsako West Local Government Area, Edo State APC,” suspending Oshiomhole as a member of the APC was of no effect.

The judge, who ordered that the status quo ante bellum should be maintained, directed all parties to the suit before him on the subject, not to give any effect whatsoever to the “purported resolution” suspending Oshiomhole as a member of the APC.

He made an interim order, directing the APC; the INEC; the Inspector-General of Police; and the Director General, State Security Service “either by themselves, servants, privies, assigns or any other officer, howsoever described and by whatever name called, from giving effect to the purported resolution of Ward 10, Etsako West Local Government Area of 2nd November 2019 suspending the 2nd defendant (Oshiomhole) as a member of the 1st defendant (APC) pending the hearing and determination of the motion on notice.”

The judge also restrained INEC from “dealing, communicating or howsoever recognising any person other than the 2nd defendant (Oshiomhole) as the national chairman of the 1st defendant (APC) for any party business or carrying out any duties in the commission by the Electoral Act.”

The ex parte application leading to Justice Lewis-Allagoa’s orders was filed by one Aliyu Muhammad Rabiu.

The judge adjourned till April 8 to hear the motion on notice filed by Rabiu.

Shortly after meeting the President, Major-General Muhammadu Buhari (retd), on Thursday, Oshiomhole went spiritual as he rained curses on those he believed were behind his current ordeal.

He said God, who listened to his prayers, would bring out whatever his enemies planned against him in darkness and destroy it in daylight.

The former governor of Edo State also accused “some governors and a particular minister” of teaming with some forces in the APC to rubbish his achievements.

He fingered Governor Godwin Obasaki of his state, whom he described as “a son I gave birth to”, as one of the governors. But, he didn’t name the others and the said minister.

He stated, “Let me also say that those behind this plot, the hands you saw, which include as you saw yesterday (Wednesday), the Edo state governor and his people jubilating.

“But, that is the irony of life; that you will help give birth to a child and the child looks for a cutlass to want to chop off your neck. It has happened in history; it has happened in this country so I won’t be only person.

“But, there are other forces who see me for whatever reason as a threat to them. And those leading this anti-Oshiomhole campaign, some of them I emphasise, cannot even boost of a councillor in their state even as they lay claim to leadership position in our party.”

Oshiomhole had rushed to the Presidential Villa, Abuja, for a meeting with the President, Major General Muhammadu Buhari (retd.), soon after Justice Lewis Allagoa set aside an earlier ruling of the FCT Court suspending him as the APC’s chairman.

He had also visited Buhari on Tuesday, just 24 hours before the FCT High Court granted the interlocutory prayers to suspend him on Wednesday.