Buhari tried his best to save Sanusi from dethronment - Presidency 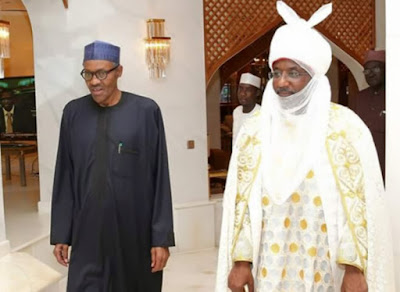 Contrary to allegations of collusion to remove former Emir of Kano, Alhaji Muhammadu Sanusi II from office, the presidency had intervened at many stages of the conflict to avoid escalation in the last two years.

A reliable source in the State House, Abuja, who spoke on condition of anonymity, informed correspondents that the efforts collapsed because of the intransigence of the two sides to shift ground.

According to the source, when the Gov. Ganduje administration made up its mind to remove Emir Sunusi as far back as 2017, the governor informed President Buhari of this decision.


”He, however, asked for advice and guidance. Outrightly, President Buhari said it was inappropriate and requested that the plan be shelved.

”This meeting was followed with a written letter to the governor dated Nov. 17 2017 in which the President’s advice was clearly stated.

”The President directed his Chief of Staff, Abba Kyari to follow up for a peaceful resolution of the crisis of confidence between the two,” the source added.

The source maintained that this led to the setting up a Committee made up of five state Governors led by Gov. Kayode Fayemi of Ekiti, adding that the governors did their best.

He said following the intervention of the committee calm returned but occasional flare-ups continued and were aggravated by the tense situations under which the governor reemerged for his second term in the 2019 general elections.

The source further narrated: ”In the course of that period, Gov. Fayemi, his Jigawa State counterpart, Abubakar Badaru and to some extent the Inspector General of Police made several expeditions to Kano, to prevail on the Governor not remove the Emir in those tense moments in the interest of peace and security.

”The main grouse of the administration was that the Emir had failed to stay above the fray of partisan politics, especially as it related to the Governor’s re-election.

”In reaction to the various suggestions by senior citizens including Generals Ibrahim Babagida, Wushishi and Abdulsalami Abubakar, among others, the Chief of Staff sought for permission and gave the green light for the commencement of work by the Abdulsalami Abubakar committee.

”The committee members sat down with the President at the Villa to discuss their mission.

”At this meeting, the President outlined the efforts he put into the resolution of the conflict in Kano and said he had had enough.

“He gave assurances of support and put at their disposal, the use of the Presidential Air Craft, then wished them the best of luck.

”But he did make clear that if the situation warranted it, we would not hesitate to clamp an emergency rule on the state.

”Governor Ganduje gave conditions for peace, including the withdrawal of court cases by Emir Sanusi against the Kano State Government.”

The source revealed that Sanusi allegedly accepted to withdraw some of the cases but stood his ground on the others, including his refusal to withdraw a court case instituted by Bashir Tofa and his group, who the state government alleged to be Sanusi’s proxy in the case.

According to the source, the Governor insisted that the newly-created emirates must be kept but acceded to the Emir that four of the five Kingmakers whose districts were excised from Kano be reinstated.

He said the Emir agreed not to appeal the decision to uphold the Emirates by the courts.

The source said: ”It was clear all this while that the inflexibility to meet some of the conditions for peace by both have added complications that made peace almost impossible.

”For example, the former Emir had wanted the Kano State Anti Corruption Commission to stop its case against him completely.

”He stood firmly that the case he instituted against the Code of Conduct Bureau will not be withdrawn because, in his view he needed to pursue it to clear his name, a demand that Gov Ganduje rejected.”

The source, however, said the Abubabar Committee report did not give any “glimmer of hope” for ending the crisis, adding “a mediator’s success depends largely on the cooperation of the parties involved.”

Despite these frustrations, the source explained that the President did not give up on the efforts for peace.

The presidency official said that when the Chief of Staff led a delegation to condole the former Emir over the death of Amb. Sunusi, the late Dan Iyan Kano, and the former Emir’s uncle, Abba Kyari met separately with Ganduje and Sanusi in a renewed effort to reconcile the two actors in the conflict.

According to the source, having gone to this extent for peace, it is uncharitable and baseless to accuse President Buhari of ordering Ganduje to depose Sanusi.

The President holds Sanusi in the highest esteem and has nothing personal against him and, therefore, he could not have told Ganduje to depose him.

The presidency source also described as ‘nonsensical’ the allegations that “Abuja,” referring indirectly to President Buhari, is complicit in the Emir’s alleged forceful removal from the palace and exile to Nasarawa.

He said: “Chieftaincy law in Northern Nigeria going back to 1919 makes for the deposition and confinement of Emirs and Chiefs.

”Sarki Alu of Kano was removed by the colonial administration using this law and was walked to Lokoja on foot to start a life of exile.

”State governments have used that law to full effect dealing with Sultan Dasuki in Sokoto, removed and kept in Zing, Taraba state, and Emir Jokolo of Gwandu, Kebbi State, who has been kept away from the state now for over two decades.

”Kano State did not need President Buhari’s authorisation for anyone to remove and exile Emirs and Chiefs.”(NAN)