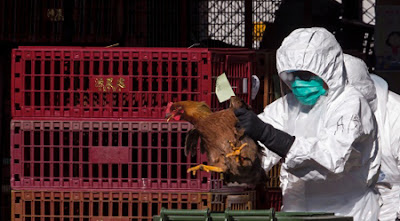 Highly pathogenic’ bird flu has broken out in two Chinese provinces near Hubei since the beginning of the month as Beijing struggles to contain the novel coronavirus currently ravaging the country, Dailymail reports.

Nearly 2,000 fowl were killed by the H5N6 strain of avian influenza on a poultry farm in Sichuan Province, Chinese agricultural authority announced yesterday.

Just eight days earlier, 4,500 chickens were reported to have died of H5N1 virus in the province of Hunan.

The latest outbreak in Sichuan took place at a county called Xichong in Nanchong City, which is about 12 hours from Wuhan by car.

China’s Ministry of Agriculture and Rural Affairs reported that 1,840 out of the 2,497 domesticated birds on the farm were killed by the infectious viral illness.

Local authorities culled 2,261 birds as a result and safely disposed their carcasses – as well as those of the birds killed by the influenza – according to the notice.

The Ministry did not specify on which day the outbreak happened.

The Ministry on February 1 alerted an outbreak of H5N1 bird flu in Hunan Province, which borders Hubei.

The bug hit a chicken farm in the city of Shaoyang, which is about a six-hour drive from Wuhan.

The Ministry said 4,500 out of the 7,850 chickens on the farm were killed and local officials had to cull 17,828 birds in a bid to contain the disease.

The bird flu has been classified as highly pathogenic because of the number of birds which have died from the disease.

There are lots of different strains of the virus.

Both H5N1 and H5N6 are among the four strains that have caused concerns of a bird-to-human transmission, according to NHS.

Although the disease doesn’t easily infect humans and is hard to spread from human to human, several people have caught it around the world and died.

The reports of the bird flu outbreaks come as China is straining all its resources in a bid to curb the fast-spreading novel coronavirus, which emerged in Wuhan late December and has killed at least 910 so far.

Nearly 100 people died of coronavirus yesterday on the deadliest day of the outbreak so far.

The death toll in mainland China rose by 97, taking the number of global fatalities to 910.

Another 3,062 cases were reported in China yesterday – an increase of 15 per cent compared to Saturday which put an end to a series of daily declines.

China said today that 27 foreigners had been infected with the virus in the country, including two of the country’s 908 deaths.

Two people have died outside mainland China, one in Hong Kong and the other in the Philippines, taking the global toll to 910.

More than 360 cases of the virus have been confirmed outside China, bringing the total to at least 40,531.

The fatality toll has passed the 774 people believed to have died in the 2002-03 SARS outbreak, another viral outbreak that originated in China.