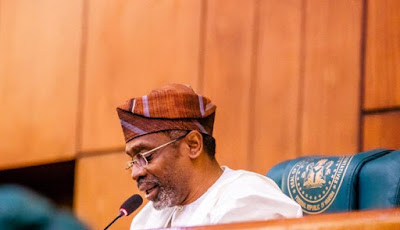 An aide to Femi Gbajabiamila, Speaker of the House of Representatives has more or less confirmed the multi-million naira 90th birthday celebration of Alhaja Lateefat Olufunke Gbajabiamila, who is the mother of the Speaker, and first Chairman of Surulere Local Government of Lagos State.

It was gathered that Special Adviser on Media and Publicity to the Speaker, Lanre Lasisi gave the confirmation on Tuesday and argued that the Speaker would not be depending on public funds to celebrate his mother’s 90th birthday, stressing that the event was strictly for family members and a few childhood friends.

“The Speaker, his family and a few friends were in Dubai to celebrate the 90th birthday anniversary of Alhaja Lateefat Olufunke Gbajabiamila, the Speaker’s mother. For the records, this event was strictly for family members and a few childhood friends for which no public funds were appropriated or expended,” a statement by Mr Lasisi read in part.

Recall SaharaReporters had earlier calculated how Speaker Gbajabiamila and his family may be required to spend a whopping half a billion naira to celebrate their mother’s birthday starting from March 2, with the fanfare and lavish celebration to mark the woman’s 90th birthday expected to run until March 10 in the glittering city of Dubai.

Findings by SaharaReporters revealed that the average price for round-trip flights from Nigeria to Dubai is currently $637 (N229,320). When this is calculated for 300 guests, the total expenditure for airfare falls to N68,796,000. This is even as a member of the planning team has hinted that some guests have been booked for special and luxurious accommodation and that top personalities not slotted into private jets have already been booked for special seats on commercial airlines heading to Dubai.

According to the planning team member Alhaja Gbajabiamila played a pivotal role in Speaker Gbajabiamila’s foray into politics; hence, the Speaker is prepared to celebrate her in a big way especially as she reaches the milestone age of 90, going by the calibre of guests that would be gracing the occasion.

However, another source privy to planning of the birthday bash has revealed the decision to hold the party in Dubai was strictly on the speaker’s mum insistence, which was difficult to overrule as the Speaker is not the first child.

According to the source, the Speaker was duty-bound to respect the decision of his siblings who some of them are 12 years older than him, saying “Besides, their mother, contrary to being an outgoing woman, wished for a private and simple birthday ceremony with very close friends and associates”.

The source further stated that “the woman, who was also the first chairman of Surulere Local Government, believed that if it was held in Lagos, the venue would be filled to the brim and raises fear or crowd control. Being a politician, she has clout and she remained relevant till the present moment in the Lagos political scene.

“Though being the nation number 4 man, the Speaker was not able to sway it as he had one vote at the family meetings to organise the party and for weeks he consulted his close friends on how to handle it. As a matter of fact, it was alleged that he, at some point, tried to seek mama consent to be away from the party.

According to a report, no member of the National Assembly was invited to the family prayers and party held last Friday at the Eagle Club Hon Gbajabiamila till the last minute and kept it as low key as possible.

The source also added that Gbajabiamila had to appeal to Gov Abiodun who wanted to grace the occasion ‘to please stay away’ because he did not want the frenzy as it also came as a shock to many that Hon Jimi Benson, a very close friend, was not even on the trip neither were NASS members.

“The story he is spending to millions is crazy and work of political enemies. Do you even know it is cheaper to do a party in Dubai than in Lagos? The guests are limited and you only pay for venue, food and drinks, unlike the carnival that will have happened in Lagos. Mr Speaker is very conscious of the mood of the nation now and won’t do anything to upset it. So count him out of any jamboree,” a source stated.