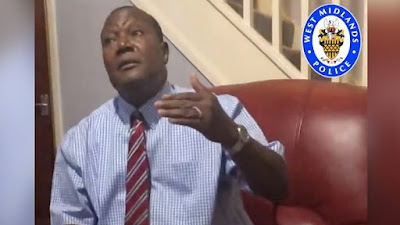 A Nigerian pastor, Michael Oluronbi, has been jailed for 34 years in the United Kingdom for defiling children and sexual assault.

A Birmingham Crown Court handed down the sentence after he was found guilty of the offence.

Oluronbi, 60 was convicted of raping some children for a period of 20 years. He was said to have committed the act during religious bathing rituals he claimed would wash their sins away and cleanse them from evil spirits.

His wife Juliana Oluronbi, who arranged abortions after four girls became pregnant, was jailed for 11 years.

Both were found guilty by jurors at Birmingham Crown Court after a trial in January, BBC reports.


The trial heard Oluronbi had victims stand naked in a bowl of water to undergo what he called “spiritual bathing”.

He claimed it would cleanse their souls and protect them from the devil.

In some cases, he added, the offending “progressed to repeated rapes, on many occasions leading to unwanted pregnancies and terminations”.

Oluronbi was arrested at Birmingham Airport last May, while trying to leave the country for Nigeria.

The defendant, of Orchard Drive, Longbridge, told police “the devil made me do it” after his arrest.

Judge Sarah Buckingham, sentencing, said Oluronbi’s crimes “must be one of the worst cases of sexual abuse of multiple children to come before the courts”.

“You did this because you are an arrogant, selfish and vain man,” she said.

In statements read to the court one of the victims, now in her thirties, said Oluronbi had “taken my innocence, my youth and my purity as a child”.

Another said: “I used to eat soap until I was physically sick so I could get rid of this man’s mark on me inside and out”.

A third woman said she no longer attended church.

“I don’t think I can ever place my faith in religion again. I trusted him”, she said, “because he was like God on earth.”