12 SAN's to represent Sanusi as he takes Kano state govt, FG to court 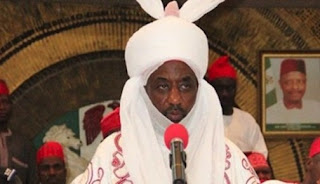 The deposed Emir of Kano Muhammad Sanusi II has challenged the restriction of his movement and banishment to Awe community in Nasarawa State.

He wants the court to declare the restriction of his movement, in the guise of banishment or otherwise, as unlawful.

The deposed Emir is praying the court to restore his right to dignity, personal liberty, freedom of association and movement.

The fundamental rights enforcement suit was filed at the Federal High Court in Abuja yesterday by a team of about 30 lawyers, including 12 Senior Advocates of Nigeria (SANs) led by Prince Lateef Fagbemi.

Sanusi said respondents were violating his constitutionally guaranteed rights to freedom of movement.

He is praying the court to declare his banishment to Nasarawa as illegal and therefore null and void.

He was taken to Loko and subsequently to Awe both in Nasarawa State.

Residents of the town, however, said Sanusi was welcome.

A former Nasarawa Commissioner for Information, Abdullahi Mustapha, said: “We wish the circumstances of his visit and stay were different.”.

A former special adviser, Mohammed Tafida, said residents were hopeful that something good would come out of Sanusi’s stay.

Sanusi was absent at the Nnamdi Azikiwe University, Anambra State, where he was to be conferred with an honorary doctorate degree during it institution’s convocation.

The Vice-Chancellor, Prof Charles Esimone, said Sanusi, hopefully, would attend the next convocation.

The Senator said in a statement: “It is very unfortunate that our current traditional rulers are only being used as tools to resolve conflicts.

“As a traditional title holder, my primary aim of joining politics is to protect the integrity of the traditional institution.

“In Nigeria, many governors involve traditional title holders to assist them in running their governments.

“What happened in Kano recently where the governor, within two hours, dethroned a first-class Emir and banished him to far away Nasarawa State was very unfortunate.”

Senator Jibrin called on the National Assembly to make the procedure for the removal of traditional rulers stringent and to give official roles to monarchs in the soon-to-be reviewed Constitution.

“Emir Sanusi, a highly respected traditional ruler, should not have been treated like a rat that was being pursued. The people of Kano and the Sanusi family deserve an apology,” Jibrin said.

Jibrin’s sentiment is shared by a former Anambra State governor Peter Obi, who said Sanusi’s dethronement “impacted more negatively on Nigeria than on the former Emir himself”.

He added in a Facebook post: “A few weeks ago, while speaking to investors in London, their primary concern about investing in Nigeria was the unceasing lawlessness and insecurity issues in the country.

“The recent reckless executive action in Kano further validates their fears. We must be better and act better if we seriously plan to play on the global stage.”

Also on Thursday, the Socio-Economic Rights and Accountability Project (SERAP) said it has filed a complaint before the United Nations Working Group on Arbitrary Detention.

The complaint is against the Federal Government and Kano over the Sanusi’s “arbitrary detention and degrading treatment”.

SERAP wants an enquiry on “the legal basis for his arrest, detention, and degrading treatment, each of which is in violation of international law.”

The complaint, contained in a March 11 letter, was signed by SERAP Deputy Director Kolawole Oluwadare and addressed to Chairman/Rapporteur of the Working Group Mr José Guevara Bermúdez,.

SERAP said: “The arrest and continued detention of Emir Sanusi Lamido Sanusi is an egregious violation of his human rights.

“We urge the Working Group to request the Nigerian and Kano State authorities to investigate and hold accountable all persons responsible for the unlawful arrest, continued detention, and degrading treatment of Emir Sanusi.”

SERAP also urged the Working Group “to request the Nigerian and Kano State authorities to award Emir Sanusi adequate compensation for the violations he has endured as a result of his unlawful arrest, arbitrary detention, and degrading treatment.”