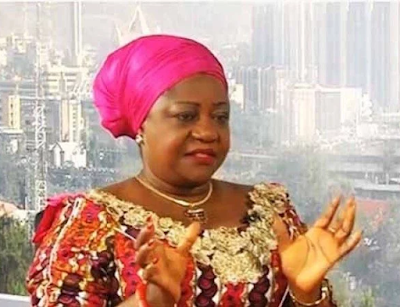 President Muhammadu Buhari’s Personal Assistant on Social Media, Lauretta Onochie on Tuesday insisted that the suspected suicide bomber caught in Living Faith Church, Nathaniel Samuel is not the only Christian terrorist in Nigeria.

Onochie stated that Samuel was a Christain Pastor planning to plant a bomb in Living Faith Church in Kaduna State before he was apprehended by security operatives.

The suspected suicide bomber who was caught on Sunday had admitted to being a Christian, adding that he attended the Living Faith’s Bible school in a bid to become a pastor.

However, former Aviation Minister, Femi Fani-Kayode had insisted that the suspect was a Muslim and not a Christian.


But while being paraded before journalists at the Kaduna State Police Command yesterday, the suspected suicide bomber insisted that his name is Nathaniel and not Mohammed Nasiru Sani as being speculated.

However, Onochie in a statement she personally signed said the incident was part of a grand plot to divide Nigeria along North and Southern lines.

The presidential aide insisted that Samuel was part of a plot to turn Nigeria against Buhari and his ethnic group, the Fulanis.

She also maintained that the attempted suicide bombing of Bishop David Oydepo’s church was a plot to divide Christians and Muslims in Nigeria.

According to Onochie: “Nathaniel Samuel, a Pastor at the Living Faith Church, who planted the bomb in a Kaduna Church has now been islamised by the nation’s topmost drug addict, Femi Fani-Kayode.

“And as usual, his likes agree with him.

“Nathaniel is old enough to know his name. He didn’t just drop from the sky. People know him and his name.

“Let no one pretend to be shocked that a Christian and a Pastor was caught planting bombs in a church. This is not the first time. It’s part of the grand design to keep this country divided along north and south, Christian and muslim, and the rest of the country against President Buhari’s ethnic group, the Fulanis.”

The presidential aide also listed some alleged Christian terrorists caught by security operatives in time past who attempted to blow up some churches like the Redeemed Christian Church of God, RCCG, Catholic Church, COCIN church.

She wrote: “Here’s a list of some Christian terrorists compiled by Omokoshaban-: Mr. John Alaku Akpavan, the man arrested in attempting to bomb Radio House Abuja on 5th June 2011 was a Christian.

“Lydia Joseph (the failed bomber of St. John Catholic Cathedral) of Bauchi State who attempted to bomb a church on September 12, 2011 was a Christian.

“Emmanuel King arrested in an attempt to bomb the Redeemed Christian Church of God (RCCG)in Yenagoa, the Bayelsa State capital, while camouflaged in Islamic attire on December 28, 2011 was a Christian.”

She also recalled that some Igbo traders had gunned down a dozen fellow Igbo businessmen of the same non-Islamic faith in Christ Apostolic Church, in Adamawa State on a Friday being January 6, 2012.

“Samson Mangai who was arrested in Plateau state attempting to bomb a church was a Christian.

“Madam Ruth, who attempted to bomb the ECWA church, Kalaring Kaltingo, in Gombe State on 12 Mar 2012 was a Christian.

“Mr Alex Danladi involved in COCIN HQ bombing was lynched by worshipers. He was a church member disguised in military
uniform.

“Jonathan Gyanet, police officer was arrested while attempting to bomb ERCC church in Akwanga Nasarawa state on April 20 2014 was also a Christian,” he added.

“Until we all learn to classify criminals as evil people, instead of by religion, we are all terrorists,” she added.