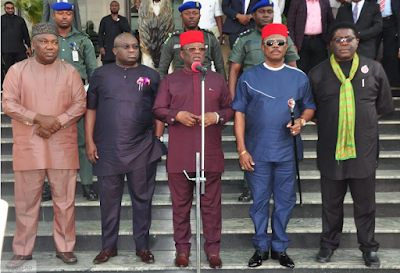 The Southeast region, on Wednesday, demanded the establishment of Ogbunigwe security outfit.

The Inspector General of Police, IGP Mohammed Adamu unveiled his community policing model to the people of the zone.

The event was at the Southeast Security Summit, organized by the Nigeria Police in Enugu.


President-General of Ohanaeze Ndigbo, Chief Nnia Nwodo and the Anglican Archbishop of Enugu Ecclesiastical Province, Most Rev. Dr Emmanuel Chukwuma took the event by storm, lamenting the level of neglect and injustice the zone was suffering.

Nwodo said any community policing that was not under the command and control of elected leaders was dead on arrival.

“Inside our mind, what our people want is to own our security architecture. The law should find a way of allowing us to have our own Ogbunigwe. So far, the system has failed,” the Ohanaeze President said.

On his part, Archbishop Chukwuma, who spoke on behalf of religious leaders said the people of Southeast would no longer condone activities of marauding Fulani herdsmen.

He said, “we have had enough of killings and kidnappings; our people can no longer go to farm. The killer Fulani herdsmen should be declared terrorists now, the Federal Government should stop pampering them.

“If nothing is done about them, we have a mechanism to defend ourselves, both spiritually and otherwise,” he declared.