VIDEO: Gov. Zulum visits school at 6:30am, promotes only teacher on duty 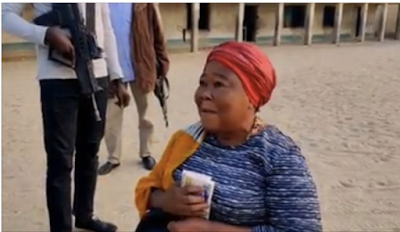 Babagana Zulum, governor of Borno state, has promoted Obiageli Mazi, a class teacher, to assistant headmistress for her dedication to work.

Shettima Kullima, executive chairman of the State Universal Education Board (SUBEB), announced the promotion on Saturday after his recommendation was approved by the governor.

During an inspection to assess public institutions in the state, on Friday, Zulum paid an unscheduled visit to Shehu Sanda Kyarimi 2 Primary School around 6:30am to see how the school’s infrastructure could be improved.

On getting there, the governor discovered that Mazi, a level 12 teacher, was the only one who had resumed for duty while the other teachers were not around.

Mazi, who is from Abia state, has reportedly been teaching for 31 years.

The governor was said to have been impressed by her commitment to work and he rewarded her with a cash gift of N100,000.

“Yesterday, as early as 6:30 in the morning, I paid an unscheduled visit to Shehu Sanda Kyarimi 2 Primary School to see how we can improve the infrastructure therein and I met teacher, Mrs. Obliageri Mazi, an Igbo Christian from Abia State who served for 31 years in the Borno state. Although it was very early, I met none of the teachers and their pupils on ground but only her,” Zulum said.

“Her gender, tribe, religion or state of origin does not surprise me but her passion, enthusiasm, dedication, commitment and above all patriotism do suprise me a lot.

“As a government, we are mightily proud of her!”

Subsequently, she was recommended for promotion.

“Even though the woman was not a graduate, her 31 years teaching experience and commitment coupled with an executive order by the governor have earned her the promotion,” Kullima was quoted to have said.

In 2019, the governor paid an unscheduled visit to some hospitals in Maiduguri, the state capital, where he did not meet any doctor on duty.

The governor, who was reportedly shocked at the conduct of the doctors, was said to have visited the hospitals around 1am to inspect the condition of patients and the facilities.

He reportedly expressed dissatisfaction at the poor service delivery to the patients he met at the state’s medical facilities.

During his campaign, the governor had said he would not condone indiscipline, especially in the state civil service.

Below is a video.