TIMELINE: From stretcher to ambulance — Metuh’s long journey to prison 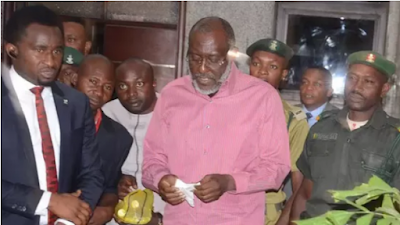 On Tuesday, a federal high court in Abuja found Olisa Metuh, a former spokesman of the Peoples Democratic Party (PDP), guilty of money laundering.
The Economic and Financial Crimes Commission (EFCC) had arraigned Metuh on seven counts of money laundering for allegedly receiving N400 million from the office of the national security adviser.
His company, Destra Investment Limited, was liquidated as the EFCC told the court that it was used to launder funds.
Metuh’s attempt to travel abroad for medical treatment failed several times, despite presenting medical reports, appearing in court in a stretcher, wheelchair and even “fainting” before proceedings.
Although Metuh once offered to return the alleged stolen funds, he maintained that Goodluck Jonathan, the former president authorised Sambo Dasuki, the former NSA, to give him the contract for the provision of “security services”.

February 25, 2020: Metuh was convicted and sentenced to 39 years imprisonment.