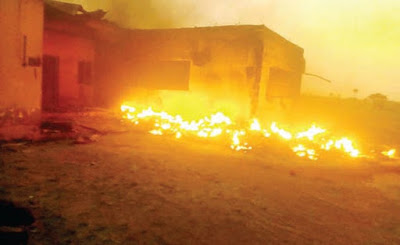 Suspected political thugs have set ablaze the office of the Independent National Electoral Commission at Orlu in Imo State.

The incident, which happened in the early hours of Monday, had caused serious confusion in the state.

It was gathered that the fire wreaked havoc on the INEC secretariat before it was put out.

It was learnt that the inferno destroyed the electoral umpire’s sensitive documents.


When contacted, the police spokesperson in the state, Orlando Ikeokwu, said the Commissioner of Police, Olaniyi Fafowora, has ordered an investigation into the incident.

He said, “I can confirm the incident to you but the cause of fire outbreak is unknown for now. The state commissioner of police has dispatched security operatives to the scene of the incident.

“The Deputy Commissioner of Police in charge of operations led the squad to the scene.”