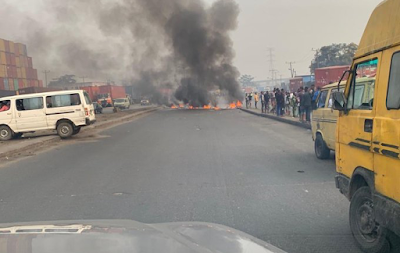 At least three persons have been feared killed after a fight broke out between commercial motorcyclists and policemen at Ijora in Apapa, Lagos.

The fight, which started around 9:30am, was said to have led to the destruction of vehicles and other properties in the area.

Policemen had gone to the port community to enforce the state government’s ban on commercial cycles but met stiff resistance from the operators who had earlier vowed to unleash mayhem in protest against the new order.

Meanwhile, another protest has surfaced at Allen roundabout, Ikeja of the state.


Commuters lamented that they were stranded at Bus Stops, had to trek long distances and pay higher transportation fares to their destinations since the ban commenced.

Recall that the Lagos State Government had on January 26 announced that it would commence enforcement of the extant Transport Sector Reform Law 2018 from February 1.