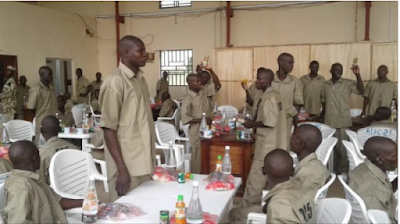 A proposed law says the Universal Basic Education Commission (UBEC) and the Tertiary Education Trust Fund (TETFUND) will fund an agency for the rehabilitation of insurgents in the north-east, the PUNCH reports.

The bill entitled ‘Establishment of the National Agency for the Education, Rehabilitation, De-radicalisation and Integration of Repentant Insurgents in Nigeria and for Other Connected Purposes’ passed first reading at the senate last week.

The proposed law has elicited debate among Nigerians with many condemning the move by the senator.

According to the newspaper, the rehab commission will also be funded by 0.5 percent of the federal allocation to the six states in the north-east.

“The agency shall establish and maintain a fund which will consist of initial take-off grant from the federal government; annual subvention from the government; states counterpart funding which will be deducted at source at 0.5 percent of their statutory allocation; 1 percent of the education Tax Fund (TETFund) and UBEC fund,” section 10 of the bill reportedly reads.

The bill also provides that the agency would be funded by grants in aid, gift, testamentary dispositions, endowments and donations.

It also provides for foreign education for repentant insurgents.

“The agency shall implement programmes geared towards the rehabilitation of beneficiaries, engage the services of offshore and Nigerian institutions in the pursuit of the educational needs of ex-agitators,” section 5 reads.

The proposed law provides that the chairman of the board of the agency will be appointed by the president subject to the confirmation of the senate.

The council will also have one representative each from the federal ministries of humanitarian affairs, finance, environment, petroleum resources, North-East Development Commission and the local content board.

Gaidam had said many of the insurgents are willing to repent.

According to him, rehabilitating insurgents is an alternative to the military option in combating insecurity in the north-east.