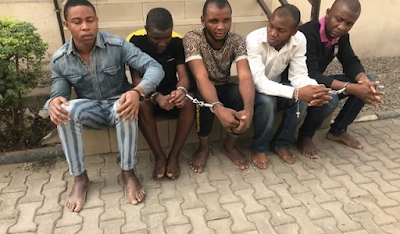 The five armed robbery suspects arrested in connection with the foiled Mpape bank robbery at a First Bank branch in Mpape, Abuja were arraigned at the Federal Capital Territory (FCT) High Court in Wuse on Friday.

They were charged to court by the FCT Police Command, in a matter with number CR/166/2020, for the robbery attempt that was foiled by security operatives on December 28, 2019.

They appeared before Justice Ajoke Adepoju of Court 22.

The prosecution led by James Idachaba, officer in charge of Legal of the FCT Command, slammed a five-court charge on them bordering on armed robbery and illegal possession of firearms.

The fifth defendant (Ewim) was represented by his lawyer, Peter Ihunweze.

Ihunweze, told the court, the first defendant’s (Larry’s), lawyer, Sunday David called him to hold brief for him.

The second defendant (Obinna) was represented by A. G. Enabosi.
Idachaba said before the hearing, if the suspects without representation are unable to get lawyers, they would contact the legal aide council to get lawyers to defend them in line with constitutional requirements.

After they suspects had the charges read to them by the court, they all pleaded not guilty to all of them.

Idachaba said taking into consideration that the suspects had pleaded not guilty, they were ready for trial.

He said they have seven witnesses and also some vital exhibits to prove their case.

He said subject to the convenience of the court, the prosecution would not mind just one week to conclude the trial.

The prosecutor said the case was easy because the defendants were caught in the act.

He called for the remand of the defendants in prison custody pending their trial.

Ihunweze and Enabosi aligned with the submission that the suspects be remanded in the custody of the Nigeria Correctional Services (NCS), while they seek a date to secure bail for the suspects.

Justice Adepoju after listening to all the submissions adjourned the matter to March 13, 2020 for definite hearing.

She ordered the suspects to be remanded in prison custody.