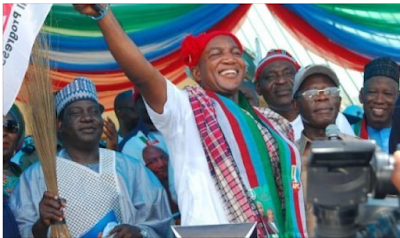 The supreme court has affirmed David Lyon, Bayelsa governor-elect, as the authentic governorship candidate of the All Progressives Congress.

A five-man panel of justices dismissed the appeal filed by Heineken Lokpobiri, who contested against Lyon in the APC Bayelsa governorship primary election, for being filed out of time.

Lokpobiri, who was a minister of state for agriculture, had filed the appeal against the Bayelsa state chapter of the APC and Lyon, arguing he won the party’s governorship primary election which was held on September 4, 2019.

On November 14, a federal high court in Yenagoa ruled in favour of Lokpobiri nullifying the election that produced Lyon as the governorship candidate of the party.

To enable it participate in the governorship election, the APC obtained an interim order from the court of appeal staying the order of the lower court which barred the party from participating in the November 16 governorship poll.

The court of appeal in Rivers state upturned the judgement of the trial court which favoured Lokpobiri.

Isaiah Olufemi, justice of the appellate court, held that the former minister failed to comply with the statutory 14-day period, saying  he ought to have filed the case not later than September 17, 2019.

Aggrieved, Lokpobiri filed an appeal before the supreme court. Emmanuel Ukala, who represented the appellant, argued that the suit filed at the federal high court was not filed out of time as held by the appellate court.

He said the 14-day statutory period started to count after the APC submitted Lyon’s name as its governorship candidate. But Lyon and the party asked the court to dismiss the appeal.

They said according section 285 (9) of the 1999 constitution the 14-day period ought to have started immediately the result of the primary election was announced.

Reading the judgment, Inyang Okoro said: “In conclusion, it is my well considered review that the appellant filed his case at the federal high court outside the 14 days allowed by section 285 (9) of the constitution.”

“His cause of action arose on 4th September 2019 and not 7 September as he contended. Thus, the sole issue in this appeal is resolved against the appellant. Accordingly, the appeal lacks merit and is accordingly dismissed.”

Lyon emerged winner of the election with 352,552 votes.