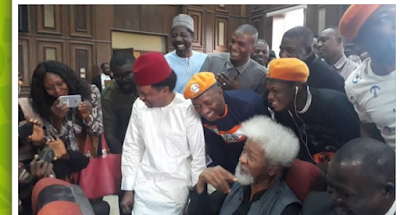 Speaking with Sani upon arrival in the courtroom, Soyinka jokingly called the former Senator a “criminal.”

Soyinka who was seated on sighting Senator Sani said: “aha here comes another criminal like Sowore.”

Responding to the joke, Sani said: “Sir you are the patron of the criminals club.”

Sowore, who and his co-defendant, Olawale Bakare, are facing trial over charges of treasonable felony.

The Department of State Services, DSS, had arrested Sowore and Bakare for calling for a revolution protest on August 5, 2019, against the Federal Government.

Following the call, the DSS on August 3, 2019 arrested Sowore and remained him in custody until December 5, 2019, despite several court orders granting him bail.

He was released after 124 days in custody, but forcibly rearrested at a federal high court in Abuja — less than 24 hours after his release.


Wole Soyinka, Shehu Sani and Sowore make jest of Buhari government in court
A post shared by nwachukwu john owen (@realjohn_owen) on Feb 12, 2020 at 1:51am PST