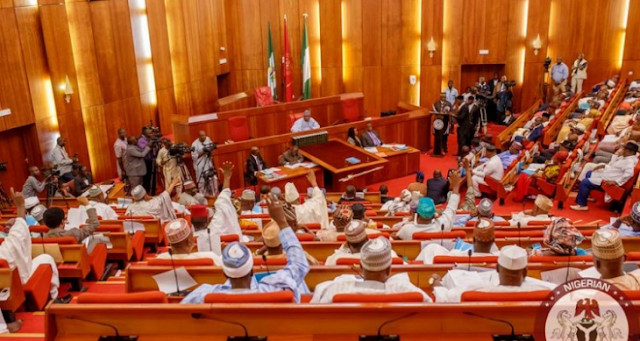 The Senate on Thursday started the process of establishing an agency that would fully reintegrate repentant Boko Haram terrorists into the Nigerian society.

The bill to establish the agency passed first reading today at plenary.

The proposed agency, according to the proposed legislation, would provide education for insurgents.

It would also rehabilitate, de-radicalise and integrate the repentant insurgents in the country.


The bill is titled, ‘National Agency for the Education, Rehabilitation, De-radicalization and Integration of Repentant Insurgents in Nigeria’.

There were recent reports that the Nigerian military has a rehabilitation centre for repentant Boko Haram terrorists in Gombe State.

The centre, it was also reported had trained and rehabilitated over 1,000 insurgents since its inception over three years ago.

Although the programme for the rehabilitation began in 2016 but it wasn’t until 2018 that the release of the suspects began.

It was further learnt that the repentant insurgents are trained in various professions like tailoring, mechanic and other skills.

The Borno State Government had also revealed that about 1,400 repentant Boko Haram suspects have been released by the military and rehabilitated into the society.

The Acting Defence Spokesman, Brig-Gen. Onyema Nwachukwu recently said, “In 2016, the Federal Government initiated Operation Safe Corridor to de-radicalise repentant members of Boko Haram. It is not anything that is done haphazardly.

“The target audience is not those captured in combat. No!

“Those captured in combat are processed for prosecution, but the ones that have not been ideologically indoctrinated because they were conscripted; they were abducted are the ones being rehabilitated.

“They call them low-risk combatants. Those ones do not buy into Boko Haram agenda; they were forced into it.

“These repentant members have been assisting the military, by providing intelligence on Boko Haram’s activities…”