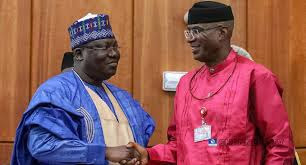 Ovie Omo-Agege, deputy president of the senate, on Thursday, presided over the affairs of the upper legislative chamber — for the first time.

Omo-Agege took over the dais from Senate President Ahmad Lawan who had begun presiding over the day’s business.

“It’s great to see you there,” Manager told the deputy senate president who is also from Delta state.


Omo-Agege then replied: “Thank you”, amid cheers and laughter.

This is coming about eight months after the ninth senate was inaugurated.

There was the speculation that Lawan did not allow Omo-Agege to preside over the senate’s plenary sessions because of a rift between them.

But Thursday’s development may put the speculation to rest.

In the previous senate, Ike Ekweremadu, the then deputy senate president, presided over plenary sessions on a number of occasions.

He also handled important legislative matters such as the confirmation of nominees to the supreme court.