RCCG protest is a call on Buhari to resign -Lawyer 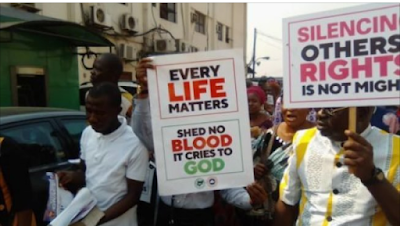 Tope Akinyode, a human rights lawyer, says the protest the Redeemed Christian Church of God (RCCG) held on Sunday is a signal for President Muhammadu Buhari to resign.

Enoch Adeboye, RCCG general overseer led the protest after a thanksgiving service at the church headquarters in Lagos.

Adeboye said every soul lost to insurgency is precious to God, while praying that evildoers in the country be exposed.

Reacting to the protest, Akinyode, who is the national president of Revolutionary Lawyer’s Forum, said it is up to “patriotic citizens” to protest and register their displeasure against any anomaly.


He asked the president to step down “if he finds it hard to perform his constitutional duty of protecting the lives and properties of citizens”.

“We commend the leadership and members of RCCG for exercising their constitutional rights as enshrined under Sections 38, 39, 40 and 41 of the 1999 constitution by taking to the street to protest against rising insecurity and wobbling economy in Nigeria,” the statement read.

“It is unfortunate that the backward Buhari regime considers every criticism unpatriotic. The biggest disservice of the regime is its clampdown on human rights, free speech and press freedom.

“It is worthy of note that by virtue of S 33 of the 1999 Constitution, every Nigerian has right to life and that right cannot be illegally taken away. It is for this purpose that Section 14 (2) of the Constitution provides that ‘the security and welfare of the people shall be the primary purpose of government’. Where government is failing in its primary responsibilities as prevalent today, patriotic citizens of goodwill must protest and register their displeasure against such anomaly.

“We wish to remind President Muhammadu Buhari that if he finds it hard to perform his constitutional duty of protecting the lives and properties of citizens, it is very lawful for him to resign as provided by S 306 (1) and (3) of the Constitution. Otherwise, the National Assembly should take the bull by the horn and commence impeachment proceedings against him in accordance with S 143 of the Constitution.

“It is our considered view that there is no more time for Nigerians to sit on the fence or fold their arms over the awry incompetence of this administration. We hereby call on all Nigerians to raise their voices and demand for the resignation of the president.”

Enyinnaya Abaribe, senate minority leader, had earlier called for the president’s resignation over the widespread insecurity in the country.